Black Rebel Motorcycle Club have made a nice career for themselves by sliding from the reverb-soaked Jesus & Mary Chain territory to more of a roots-oriented approach, but not so much that they’d be snarkily referred to as Black Keys Motorcycle Club. Their love of slide guitar was apparent from the early days, with “Red Eyes and Tears” featuring Peter Hayes’ slide guitar strafing throughout and divebombing all over the place.  Robert Levon Been’s playing is equally ramshackle yet precise, and the two switched off between guitar and vocal duties seamlessly, with Leah Shapiro anchoring the beat with metronomic accuracy. Boston didn’t get the “Chelsea Hotel #2” cover that was worked into the previous night’s set, but there was little to complain as they did a pretty wide-ranging plundering through their back catalog.

As openers, DFA1979 and Deap Vally showed two different takes of the rock duo format. The Toronto-based DFA1979 was leaning more into the noise rock end of things, with Jesse Keller’s heavily distorted bass echoing throughout the club, while Sebastian Grainger pulled vocal duties along with his drumming. Grainger’s well-worn Butthole Surfers t shirt (with an amazingly/impossibly strong thread still bridging the gap of two holes at the collar) belies their love of dirt and grime in the mix, they aren’t quite in the same deep end as Lightning Bolt or godheadSilo, and had a large contingent dancing along. Deap Vally was more into dirty fingernail garage rock, and I’m betting that a search warrant would likely turn up a handful of records from The Sonics, Thee Oh Sees, Ty Segall and The Mummies.  An eclectic night for sure, but it all hung together.

Click on the photo below for a gallery of all three bands: 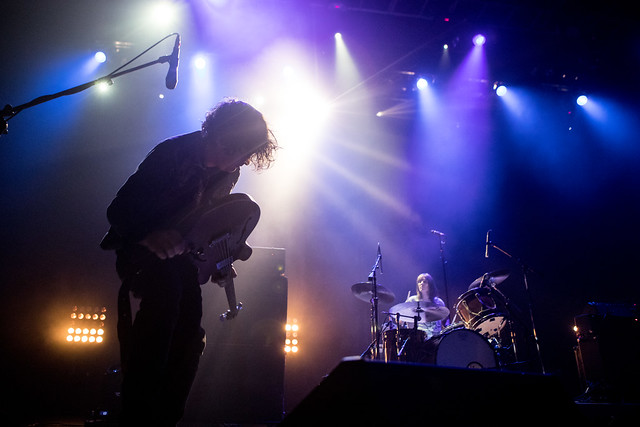