Like most festivals, Boston Calling has had a history of being top-heavy. It’s the nature of how these things go: the bigger names stand atop smaller ones on the lineup poster, drawing more eyes and thus bringing more people to the festival. For most festivals, that becomes reason enough to ignore the lower rung of musicians, sprinkling whatever remaining funds they have into bands the promoters have been told are great, but, when pressed for time, they do little research on to confirm their talent and draw. If you’re looking for another reason to feel proud of your city (and Papi knows we have plenty of ’em), here you go: Boston Calling continually books some of the best opening acts in the festival game.

Saturday was ripe with talented hip-hop. For most attendees, Danny Brown was the biggest draw of such, and to be fair, the crowd was massive. He performed at the blue stage, where a turf field and stack of bleacher seats were filled with kids eager to hear him rap through last year’s surprisingly solid Atrocity Exhibition or laugh his way through undecipherable antidotes. Brown’s yappy tone alone could hold people’s attention during the hottest part of the day. But it was acts earlier in the day that performed with unparalleled confidence. Russ showed up late to his own set but went hard for the 20 minutes that remained. Zimbabwean-Australian rapper Tkay Maidza performed with effortless gusto, the type of charisma that seems nonchalant even though she was likely nervous as the first artist to perform on the blue stage. The most dominant of all was Cousin Stizz. The Boston rapper claimed home turf with effortless tempo, getting the crowd to chant in tandem with him, several of whom seemed unfamiliar with the actual words but picked it up quickly. It was an uplifting moment at the festival, if such a word can be used, to see someone host a hometown family reunion — especially when bringing out fellow hip-hop locals for guest verses who have yet to receive the same critical acclaim.

The festival’s skills at handpicking early acts shone brighter than ever during Moses Sumney‘s set. The Los Angeles singer-songwriter won over the main stage crowd without ever raising his voice or resorting to gimmicks. Armed with a loop pedal, his guitar, and several microphones, Sumney worked his way through a set of loop-built songs that flow between soul folk and rhythm-heavy birdsongs. Though early acts such as himself have to work against the obvious—audio mixing pre-set to the evening’s later acts and, perhaps worse, crowds who often aren’t there for them specifically—he commanded the crowd without the usual ego early acts have to slip into. Sumney created vocal harmonies on top of vocal harmonies, leaping to high notes with seemingly little effort, all the while churning through a set of songs that felt at once intimate and freeing. A guitarist and keyboardist joined him for several other songs, fleshing out his already multi-layered tracks, but it was when he performed quiet numbers like “Plastic” and rousing build-ups like “Lonely World” that reminded people what a spine-tingling set feels like. Onlookers froze to soak it up. He turned the space into a momentary area of respite.

Originally, Boston Calling’s new location came with other new additions, like a film festival curated by Natalie Portman. While that addition fell through, they stepped up their game in its place, growing what was a tiny comedy stage from the past year into a proper comedy experience. The 13-act “comedy festival” is hosted by Hannibal Buress, who, presumably, picked the lineup. Saturday saw him share the stage with Phoebe Robinson, Jordan Rock, Bethany Van Delft, and Boston’s own Lamont Price. As the headliner, Hannibal Buress was everything fans could have wanted. He worked his way through new material, much of which saw him leaning into media and audio assistance which, instead of becoming the brute of his material, acted as well-timed flourishes, driving his jokes home with an extra touch of absurdist humor. It’s tempting to spoil his jokes here, but we don’t want to ruin what’s likely an upcoming special (viewers were reminded before he took that stage not to film the material on any device), so just know Reddit, coffeemakers, and ballet all come into play at some point.

What impressed moreso than his set (sorry, Hannibal) was the lineup. Like most fields, comedy is dominated by straight, white, cis men. At music festivals, comedy gets its own tent as a token side activity, and it then becomes even more tokenized by the addition of one (or two!) women and a few, low-billed people of color. Saturday’s entire comedy lineup didn’t see a single white dude, which may explain why regurgitated jokes and expected fodder were absent. Instead, the bill brought out the best in each act. The audience was treated to spot-on criticism of Boston, original material about cell phones, and a massive chunk of female-perspective comedy that had almost all of the female-identifying people in the audience doubling over. From Van Delft’s jokes about maternity leave awkwardness to Robinson’s material about trimming pubes over a trashcan, there was a brilliantly flipped script of most men chuckling silently or shifting awkwardly while women got targeted material. It was Robinson, riding high off her 2 Dope Queens fame, who not only packed the room, but delivered. Saturday’s performances made an unavoidable case for the obvious: comedy bills need more women and poc, and they need it stat.

Mumford & Sons headlined, but their set felt flat both in passion and energy. The xx rolled through a set of old hits and remixed tracks, but it didn’t connect on a personal level. The 1975 felt gimmicky in a cringe-worthy way. It was the earlier acts that delivered momentum and authenticity later acts are supposedly pros of. Boston Calling is still working out structural logistic issues in its new location in lower Allston, but the festival continues to succeed at what other festivals struggle with: a diverse bill, in music and comedy, that prioritizes talent over social stats. The festival doesn’t grab at the usual go-to diversity acts. They don’t settle for mediocre openers. In a music world filled with repetitive bills and male-dominated everything, Boston Calling’s dedication to building a more gender-balanced bill with overlooked rising acts creates a festival experience that, for once, feels a bit refreshing.

Click on Nathaniel Rateliff for photos of all bands: 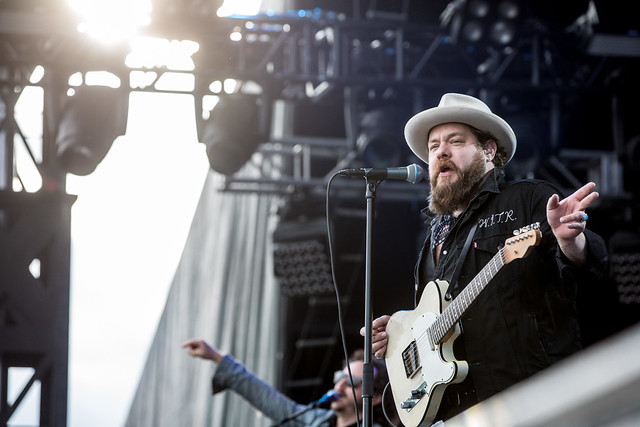