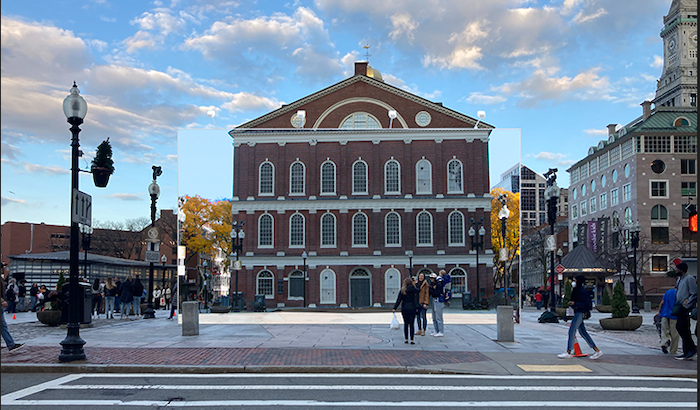 “Summer Sets offers an opportunity to play and reflect on the future of cityscapes while our historic statutes still stand.”

Juan Obando is a Colombian artist working between Bogotá and Boston, where he is an associate professor and co-coordinator of the Low Residency MFA program at MassArt. “His work focuses on the critical intervention of social systems and the subsequent production of video-performances, post-digital objects, and screen-based installations—presenting the screen as a site where ideology confronts aesthetics and new worlds are speculated.

Now + There (N+T) is a “non-profit public art curator changing the landscape of Boston with temporary and site-specific public artworks … fostering artistic risk-taking by artists of diverse backgrounds and inspiring the public to co-create bold art experiences that open minds, conversations, and spaces across Boston is the organization’s goal, resulting in a more open, equitable, and vibrant city.”

Together, Obando and N+T are bringing Summer Sets, an “installation that invites visitors to imagine and model alternative perspectives for monuments and public spaces,” to Boston’s Dock Square near Faneuil Hall along “with an oversized, hyper-realistic photographic image placed beside the iconic Samuel Adams statue.”

More from the curating team below:

Curated by Boston’s Now + There, Summer Sets challenges the view that visitors may be expecting of the monument by replacing it with another idealized, vacated cityscape, standing 28-feet wide and 16-feet tall. An LED-daylight system will illuminate the front panel at night to preserve the color and surreal intensity of the image at all times. It will be on view from July 18 to August 19 in Dock Square, located between City Hall and Faneuil Hall/Quincy Market at the intersection of Congress St and North Street.

“During the past few years in the Western world, statues, and monuments have been sites of contention, unrest, change and renewal, and reimagination,” said Obando who splits his time between Bogotá, Colombia and Boston.

“While some advocate for the takedown of these figures as a decolonizing gesture, others defend their presence as markers of history not to be forgotten, a reminder worth preserving,” said Now + There Curator Leah Triplet Harrington. “Summer Sets offers an opportunity to play and reflect on the future of cityscapes while our historic statutes still stand, therefore simulating a future at the present and past moment.”

Obando’s artwork will be strategically placed in Dock Square, adjacent to the bronze and granite Samuel Adams statue which was created by local sculptor Ann Whitney in 1880. Dock Square’s name comes from its location on the waterfront as it served boats in Boston Harbor as a landing place from the 1630s through the early 19th century before the waterfront was filled in. It has been a center for commerce throughout its long history, including the buying and selling of slaves in the 18th century.  In the 17th and 18th century, vendors would sell a variety of wares either in the open from stalls, bolstered by the opening of a controversial public market that opened in 1737.

The image of Summer Sets is purposefully candid with a commanding head-on perspective and by showing a slightly altered but culturally familiar space. It asks viewers to consider how the monument defines civic space but more importantly to consider how it is defined without it.

Designed for visitors to “stumble across,” the image acts as both reflector and projector, creating dissonance and a feeling of dislocation, especially for those that are familiar with the landscape. Viewers are invited to use this alternative backdrop for performances adding their own footprint and value from it while also imagining new hierarchies and understanding their personal implication the communal construction of memory, history, and subsequently, futures.

“Since public monuments have been a focal point for national racial and historical reckoning over the last few years, we welcome Juan Obando’s perspective-altering public art installation this summer which aims to prompt visitors to take stock and think about their own histories and participation in public centers,” said Now + There Executive Director Kate Gilbert.