If there is one band that encapsulates the “If if ain’t broke, don’t fix it” axiom, look no further than AC/DC. You might get some nominations for The Ramones, or perhaps Motörhead, but Angus Young and company have barely shifted from the hard rock template they crafted for their debut record, High Voltage, and with their dizzying success it’s easy to see why. Sex, drugs, and rock and roll- the holy trinity of AC/DC song material. The band’s been in the news lately but not for music, with the bizarre arrest of drummer Phil Rudd, and the sad news of Malcolm Young’s onset of dementia.

But the band’s weathered crises before and come out stronger, as their phoenix-like turn after Brian Johnson replaced the late Bon Scott. The touring band certainly is dominated by Johnson and schoolboy uniform-clad Angus Young, but the replacements have a history as well, with both drummer Chris Slade and nephew Stevie Young having played with the band previously. Tonight kicked off the US tour of their latest record Rock Or Bust, and the jammed crowd was certainly ready to pitch in however they could to rock.

Drawing from ten separate albums, tonight’s set was a showcase for the duck-walking antics of Young, who wailed on his SG like he was in banging away in some garage in Sydney, decades ago. Simplicity and a preternatural knack for insanely catchy riffs, Young blasted out celebrated songs like “Shoot To Thrill,” “Hells Bells,” “Thunderstruck” and more. The perpetually tweed-capped Johnson also logged mileage as he made his way to all corners of the expansive stage, and it’s a fair miracle that his throat-shredding vocal style still survives intact. AC/DC saluted all who came to rock.

Neo-soul / R&B belters Vintage Trouble got the crowd going early, their muscular and dirty grooves belied by their snazzy suits. Singer Ty Taylor had no trouble connecting to the early arrivals, flashing his toothy smile constantly throughout their set.

Click on Brian for a photo gallery of both bands: 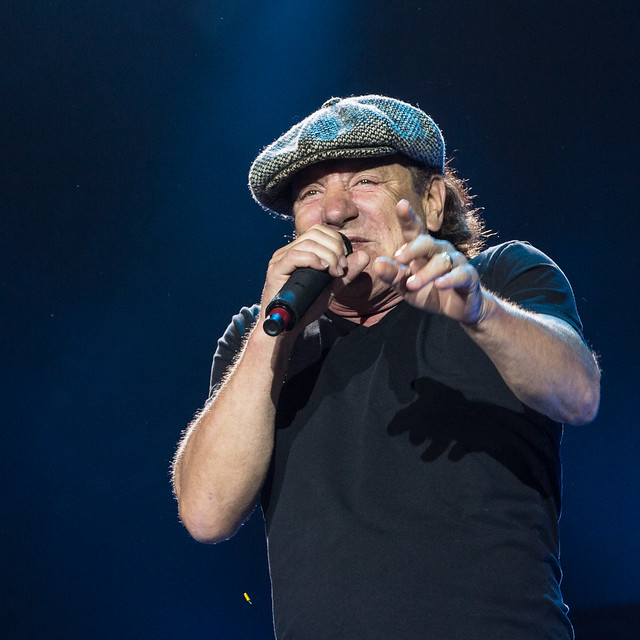