No one ever said being in a band is easy, but Baroness has had it a bit tougher than most, following on the heels of 2012’s horrific bus crash and ensuing ramifications. Aside from the obvious physical and mental pain, the momentum of their well-received third record, Yellow and Green was gone, and the band would undergo some significant changes, as six months later their rhythm section would leave the band.  Fast forward to 2016 and Baroness is riding a crest. Their new record Purple is out on their own record label Abraxan Hymns, and they kicked off their North American tour in front of a vocal crowd of Baroness fans, many wearing freshly-bought shirts from the merch table. Throngs, I’d say. The ones who know every word to every song, and want to join in with everything they’ve got.

The Baroness sound has gradually moved away from the sludgerock roots into something that’s hookier and more amenable to group chorus action. The crowd was more than willing to oblige, with the thundering “March To The Sea” leading the way, and the galloping “Kerosene” bulldozing everything as Peter Adams unleashed guitar  licks at the stage edge. Arms almost popped out of their joints when Blue favorite “A Horse Called Golgotha” came crashing down, over and through the building. Welcome back, Baroness.

Youth Code had some club bangers ready to pop once the duo hit the stage, Sara Taylor stalking the stage like a chained wolverine while Ryan George lit the electronic fuse from behind his bank of keyboards, samplers and sequencers. Part hardcore, part party mashup, all parts energy, Taylor tossed out high volume screeds between arcs of spittle that landed on the stage. Not your typical opener for a metal band, but one well received.

Photos of Baroness and Youth Code (click to open): 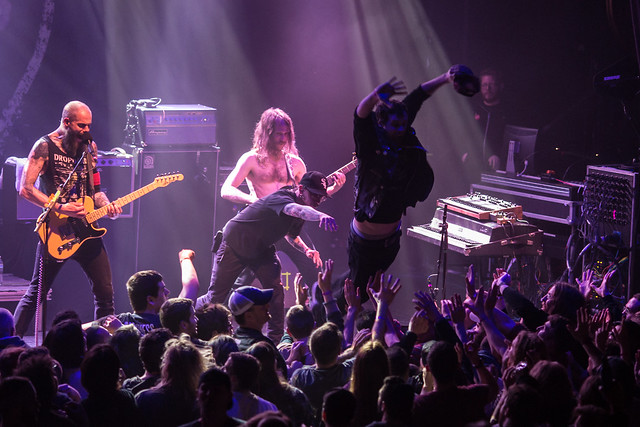