Behemoth. The word signifies massive size, power, and utter disdain for anything in its way. Some bands have a way of selecting the perfect band, and Nergal hit the bullseye here. Part black metal, part death metal, part whatever metal-based pigeonhole of your choice, the band is all business when on stage.  Dressed in battle gear, face paint and perma-scowls, the quartet rips to the blackened heart of the matter, the excellent material of 2014’s The Satanist leaving no doubt as to the subject matter and comprising the bulk of the set list.

After swinging an upsidedown cross and distributing ‘communion’ crackers to the hordes at the front of the barricade, the band stepped it up a few notches by the time they played “O Father O Satan O Sun!,” with horned helmets and ominous robes poking out from a wash of backlighting. This is a band that will raise the hackles of the unsuspecting, and the fists of the devoted.

Denmark-based Myrkur took the stage first, with the lithe figure of Amalie Bruun as the creative force behind this twist on black metal. Sure, anyone can growl and gurgle amidst blast beats and waves of guitar, but a tender side that’s steeped in pagan folk traditions emerges and creates a dazzling new world. She sang from a mic stand made of entwined branches, perhaps signifying the twin infinitives of darkness and light.

Photo gallery of both bands: 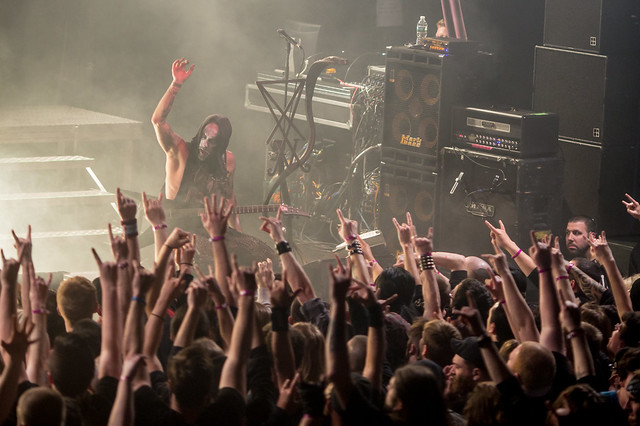