Usually I have a pretty good idea what sort of show I’m gonna see before I step through the doors of the venue, but not tonight. And truth be told, afterwards I’m still not sure. At the behest of a friend who shares a good overlap of music taste, I decided to check out Black Midi, and the stuff I previewed via streaming was more than a tad inscrutable; I figured I could assemble more of the pieces in my head with a live presentation.

The room was jammed with fervent, mask-compliant youngsters, and judging by the line snaking down Church Street well before doors this wasn’t a surprise. When the fresh-faced quintet of Londoners stepped to the stage, the crowd erupted as drummer Morgan Simpson did a karate high kick on his way to the drum kit squeezed way over stage left, and saxophonist Kaidi Akinnibi brandished a fake scimitar while wearing a Venetian mask that he’d keep on for most of the night. Taking the cue of a spontaneous “Yankees Suck” chant by the crowd before the started, bassist/guitarist/vocalist Cameron Picton eventually worked that mantra into one of the songs, and another nod to the locals was the Harvard baseball cap that Geordie Greep wore, along with wraparound shades and a camo blazer. Early on during the show, the boisterous crowd stopped for a bit at a song break and a single arm holding an orphaned Chuck Taylor emerged; I wonder if it re-found its foot. The twists and turns of the band were fueled by the impressive drumming of Morgan Simpson; if the saying that your band is only as good as your drummer, then Black Midi is world class. Exceedingly hard to pinpoint their sound, it’s a stew of sonic shards that conjured images of Primus, Aja-era Steely Dan, and Mr. Bungle. Perhaps their mothers all listened to At The Drive-In during gestation with a proprietary More Prog/Less Metal stereo playback setting, and their nurseries had The Mars Volta on during every waking minute. And, naptime too. Opening act L’Rain was a nice fit for the bill, playing a hybrid of jazz with ambient tones and samples tossed into the mix. Leader Taja Cheek, whose stage name also is the band’s name sang in a well-controlled and soothing voice, swapping between tapping out notes on the guitar frets and sometimes anchoring the sound with supple rhythm via her bass playing, as well as occasionally apply some aromatherapy to her immediate environs. More photos of both bands can be seen by clicking on the photo below: 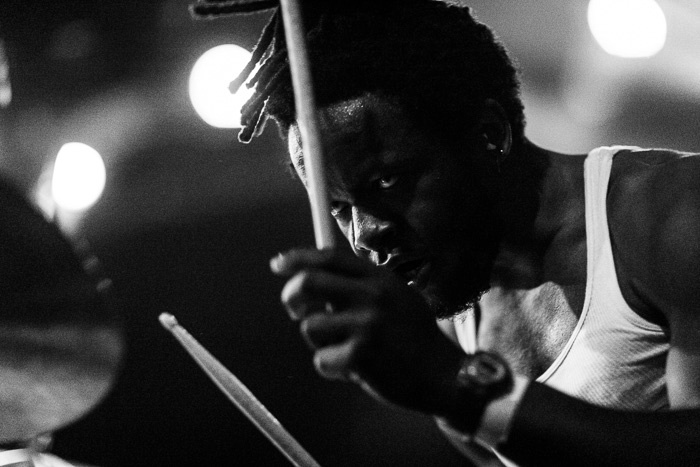