One of the basic challenges a DJ faces is how to differentiate yourself from the pack when the live show consists of people blissfully dancing in a massive, dark room and you’re on a giant stage by yourself. Joel Zimmerman aka Deamau5 figured that out pretty well when he adopted the murine-styled headgear that was instantly recognizable from a distance. But in a large venue you need more than that, and he upped the ante by reconfiguring his DJ stand/booth/visual art projection capabilities in this so-called Cube version 2.1. The youngish-leaning crowd was ready for some action, dressed in varying degrees of garb, some Deadmau5-related, some Deadmau5-inspired. Exhibit A was the intrepid, creative fan who fashioned his own version of the telltale headgear, complete with blinking lights in the eyeballs.

I’m not sure who designed and programmed the cube, but they did a hell of a job coming up with one of the more visually arresting stage setups I’ve seen. I can’t say that I am a big dance music fan in generally, but the constantly evolving display kept the rhythmic monotony of the BFFF-BFFF-BFFF ultra-loud bass notes at bay. Zimmerman did shed his stage persona a couple of times, first to enjoy a smoke while still pumping out the pulsating, insistent throb, and then later to clamber down from his mau5 fortress and do a bit of upclose meet and greet high fives with the faithful who thronged the security railing up front.

Click on Mr Mau5 for more photos of the show: 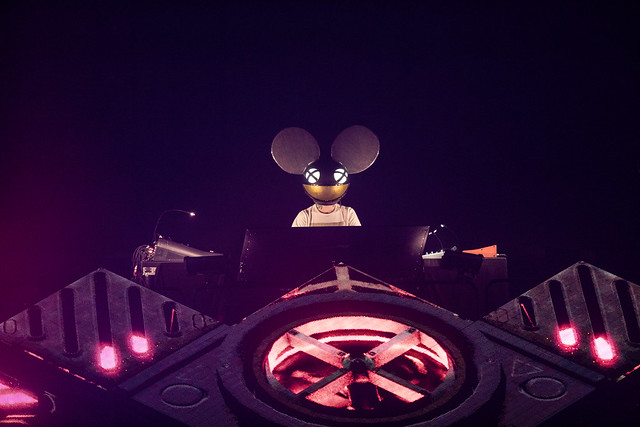