Keith Thornton has a lot of aliases; Kool Keith is the the flagship of his brand, but then there’s also Black Elvis, Tashan Dorssett, Mr. Nogatco, even Underwear Pissy. Within the broad spectrum of his work, however, Dr. Octagon is the alter ego that’s behind his career masterpiece, Dr. Octagonecologyst. As he celebrates its 21st birthday (20th if you discount the first release on indie label Bulk), he’s corralled key contributors Dan “The Automator” Nakamura and DJ Qbert into doing a short tour, both of which were just as crucial to the success and impact of the recording.

For a Friday show, this was an unexpectedly early one. Apparently there was a later event booked downstairs, so doors opened at 6:30 and Golden Age hit the stage right at 7, just after local crew Table Manners did some DJ’ing to get the mood set right. MC Do DAT and local roots guy DJ MaliciousLee hail from Oakland, and brought some tight flow and powerful words to the stage, with Do DAT working up a sweat in no time, working the crowd from each inch of the stage. As they got off stage, Table Manners was back with a rotation of deck masters, DJ Slipwax getting the lion’s share of the action. As Keith’s 8:10 set time start came and went, it became increasingly clear that the night might be full of surprises.

Table Manners did the best they could to fill the gap, and a local vape shop was giving away some gear, but the glaring absence of the good doctor couldn’t be masked. At 9:30, I had serious doubts about whether this show would actually happen, despite spying Automator come in at the back stairwell behind the stage. To keep the mood from turning sour, local hero Mr. Lif was a surprise, unannounced performer, and threw down an energetic set for a hometown crowd that was eager for something to happen. Written in the wake of the post-financial collapse bailout, “What About Us” remains on point as the wealth distribution inequality keeps growing.

Dressed in lab coats, surgical masks painted with teeth, Automator took the stage to say that Keith was stuck in traffic and he’d be here soon, but that he and Qbert along with the bass player and drummer would lay down every version of “Bear Witness” that exists, and the famous Chuck D sample of “creating rap music ‘cuz I never dug disco” (which was actually lifted from an obscure late 80s track) rang throughout the club. I guess Keith must have been hanging out with Axl Rose and Lauren Hill, since by the time he finally stepped onstage in a blood-spattered lab coat, it was almost an hour later than when his show was scheduled to end.  The set itself stuck directly to the material from the record; “3000” is as bone-crunching as ever, and the eerie, off-kilter sample of Bartok that starts “Blue Flowers” ranks among the most creative and distinctive samples in hip-hop history. You can’t argue with the material; it’s my favorite hip-hop record and clearly the sold out show felt the same. The disappointment was the short set of not even forty minutes, coupled with Keith clearly dialing in the delivery via reading lyrics through his shades from a teleprompter that was at the base of the monitors. C’mon Keith – I know some of that flow is tricky but get it together and put in some practice work before hitting the road.

Click on the Doctor for photos of the show: 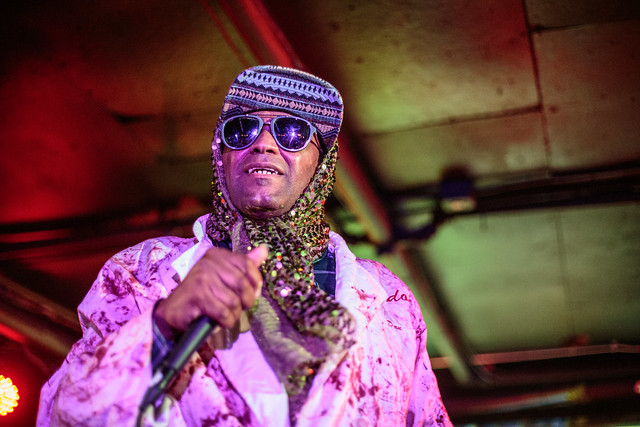