The Drive-By Truckers have had no problem wearing their particular views about politics on their sleeves, or even on their guitar straps. Tonight, Patterson Hood’s assorted buttons would include one that said “Vote Democrat – The Ass You Save Could Be Your Own.” Despite their deep red state heritage, they’ve tackled issues of race, economic equality and injustice from a decidedly deep blue perspective. When their latest record dropped, American Band was another topically-occupied collection of songs with the tragedy of Trayvon Martin as its centerpiece. Released a few weeks before the presidential election, there are a lot of new readings that can applied to the songs. I don’t think that it took Hood and co-leader Mike Cooley long to call this album-supporting tour the “Darkened Flags Tour.”

Martin isn’t the only ‘stand your ground’ victim memorialized on this record, and the long-forgotten saga of “Ramon Casiano” provided another terrible stain in the complicated American history of race and guns. Both songs featured no stage banter from either Cooley or Hood, and they let the lyrics and music do the talking. About the only stark political commentary came before “Made Up English Oceans,” when Hood and Cooley started riffing on our new Attorney General, asking what a man named Jefferson Beauregard Sessions is supposed to do when he’s born to late to own slaves?

With a discography as deep as the Truckers, and set list variety that rival jam bands, you’re always in for a surprise or two as the night unfolds. Due to the fact that this was a rescheduled show from the Thursday blizzard that canceled the original show, there was no opening act (Kyle Craft already had another post-DBT show booked) and I was kinda hoping they would get on stage earlier and really give Boston a blow out. But it’s hard to argue against a two hour show with zero breaks, and they probably wanted to save some juice for their annual Homecoming shows held down in Athens GA.

Still, some lesser-heard gems like “Uncle Frank” and “A Ghost To Most” were trotted out, and by the time the epic  “Let There Be Rock” hit, the band was augmented by the all-time rockingest MLB organist Josh Kantor. Eschewing any sort of bullshit anticipatory encore break, they kept blasting along and closed the night with a feral rendition of Jim Carroll’s “People Who Died,” Hood leaving his guitar in the stand as two roadies joined in, and I was waiting for EZB to abandon his drum kit and join the guitar army, a la the awesomely ridiculous inner gatefold image of Blue Öyster Cult’s On Your Feet Or On Your Knees live record. Maybe next time boys, maybe next time. 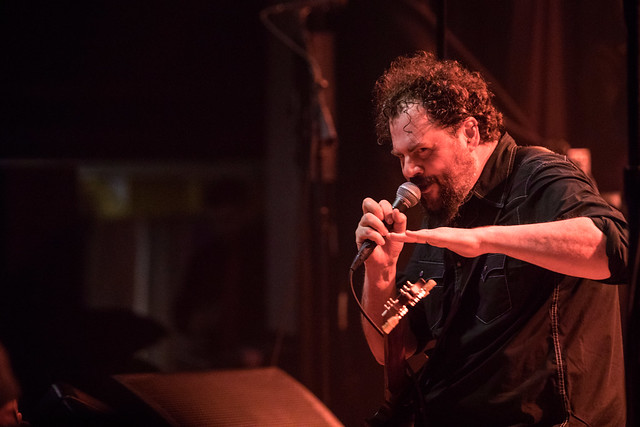