Ty Segall has a lot of irons in the fire; he’s the Robert Pollard of garage rock, only with nicer shoes. After only 28 trips around our glowing sun, he’s released over twenty records under various guises and tonight the sold out Sinclair was ready for the next dose of his power trio, Fuzz. Two years ago, Great Scott was jammed to the walls for the first Fuzz show, but Segall’s popularity and penchant for writing ultra-catchy riffs that buzz directly to the spinal column form a distinct correlation and the 500-ish capacity crowd became a united, throbbing organism when he took the drummer’s stool and crashed into the first song. While the kids were busy crawling and splayed atop of other kids, Segall and his cohorts in this power trio unit (longtime partner Charlie Mootheart on guitar, and Chad Ubovich from Meatbodies on bass) proceeded to wring every last riff out of the Black Sabbath and Blue Cheer songbooks. Segall was semi-notorious for constantly playing NYC while skipping Boston, but over the last couple of years it looks like he’s warmed to our fair city, and he’ll be playing with The Muggers at Royale early next Spring. Get your tickets before you have to start scouring StubHub listings.

Segall’s mainly known for his guitar playing, but he’s a more than capable drummer as well, and multi-tasking with vocals while four limbs were in constant motion was not an issue. Trapped behind the traps, he didn’t launch himself into the crowd as he occasionally does when playing guitar, but that didn’t stop members of WALTER from stage diving during the set. Another power trio, WALTER (try an easier band name to google next time, guys) also was a big fan of the distortion pedal, with blistering fret board action delivered by Patrick Noland’s black-painted fingernails. Looking like a member of Omega house, Noland brought intensity and shredditude to each song they blasted out.  Fine stuff, indeed.

Whoever put this bill together knew what they were doing, as locals Zip Tie Handcuffs was another perfectly fitting piece to the overall picture. And hey, another trio! These guys obviously have some records by Thee Oh Sees in their collection, as well as classic oil-stained garage bands such as The Sonics and The Cramps. With all three members singing it was a full sound, and they ripped through a strong collection of songs that were still buzzing in the air after they left the stage.

Photos of all three bands: 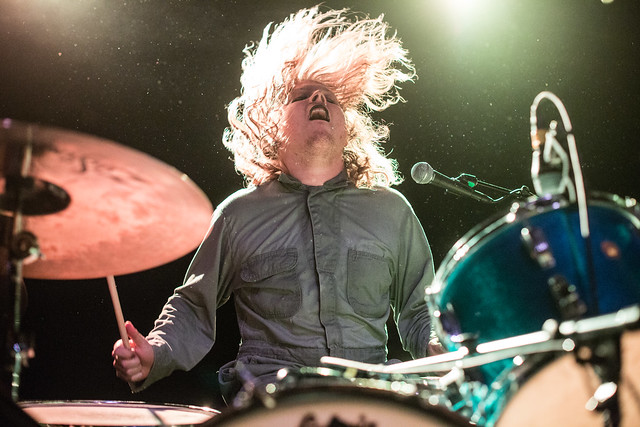