The debut record: it’s always a big statement. A band’s got the opportunity to figure out how they want to present their vision to an unsuspecting world, and only one shot to do it, and Garbage made the most of it.

Hitting the scene in the prime of the post-Nevermind era (something that drummer Butch Vig was a bit responsible for), their debut record was an instant hit, spawning five singles and selling millions of copies. The current tour, billed as 20 Years Queer, would take a look back at that collection of twelve songs and associated B sides. Recalling the album art, pink-haired leader Shirley Manson commanded center stage with a pink feather boa attached to the mic stand. (Later in the show, Manson would show her fiery side when she was going to hand it to someone in the crowd and a neighbor had other ideas, snatching it away. “No, no motherfucker! It’s not for you,” she said, yanking it back and delivering it to the intended target.)

Vig is renowned for his attention to sonic detail, and the sound in the Orpheum was clear, full, and certainly one of the best sounding shows I’ve seen at the old theater. The guitars of Duke Erikson and Steve Marker were also augmented by turns at the keyboards and samplers, spanning from the jangle-pop of “Stupid Girl” to the off-phasing intro and earworm riff of “Vow.” The band showed some of their roots as well, with Manson freelancing some of New Order’s “Temptation” into “Not My Idea.” Before taking on a gothy version of The Jam’s “The Butterfly Collector,” Manson regaled the crowd with a story of hearing “a lad” sing this song. “We went back to his flat and I fucked his brains out,” she said. The risk of coming out to play twenty year old songs only to find they are well past their sell-by date is a real one, but there was no half-hearted response from the packed house, some of them with red or pink hair dyed for the occasion. After thunderous applause following “Stupid Girl,” Manson looked genuinely taken aback. Welcome back, Shirley!

Torres, aka Mackenzie Scott and whoever she assembles in her quartet backing band, was selected to open all of the shows for the US tour and brought steely intensity from the moment she walked on stage, clad in a mechanic’s jump suit, blue lipstick on her mouth. There’s a severity to her sound that tried to cut through the murmurs and chatter that all opening bands face, and it dissipated slightly after one audience member sternly admonished those around him to be quiet. Closing her set with “Strange Hellos” was a wise move, the slow, simmering start eventually seething like a boiling cauldron of emotion and spilling over. Ostensibly written for a love/hate relationship, the way she delivered “I hope you find what you’re looking for” would blanch anyone on the receiving end. 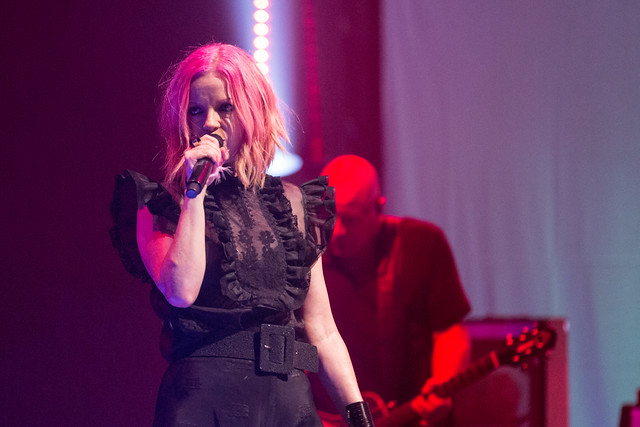