A while ago I read some factoid about Sweden having the highest ratio of metal bands per capita. Since Saab went out of business, after IKEA it’s possible that high volume guitar rock is their second leading export. Tonight would find two of Sweden’s finest checking in for the first date of their North American tour. A brisk, wintry evening was the perfect setting. This isn’t T shirt and cargo shorts music.

Spiders was up first, and if sequin shirts, tight spandex pants, or feathered jackets weren’t dead giveaways, this quartet has more in common with hard glam rock like New York Dolls or Slade than with Mayhem or Meshuggah. Looking like a genetic mix of Julianne Moore and Nash Kato, lead singer Ann-Sofie Hoyles was a constant force on stage, belting out catchy songs like “Why  Don’t You” or “Shake Electric” that set the tempo and mood to an appropriately high level. Good times.

After a break that the sold-out room used to get rid of old beer and re-fill on new beer, Graveyard took the stage. It was a bit curious for them to play the same venue that was an early date of their 2012 tour, as they played the larger Royale on their last headlining tour. But tour scheduling is certainly no exact science, and so they jammed the beloved, cramped basement quarters once again. As in the past, there was a small lineup shakeup to the core founding tandem of Joakim Nilsson (guitar, vocals) and drummer Axel Sjöberg, and when the new-to-me bass player took the mic for the lovely meandering psych-soaked “As The Years Pass By, The Hours Bend,” it took some post-show keyboard tapping to discover that original guitarist Truls Mörck was back in the fold, now on bass duty.

After a trio of solid records, the new one is a bit of a side-step. They’ve never been an outright metal band, and like fellow (and unfortunately, extinct) The Soundtrack Of Our Lives, they tend towards earworm hooks and the warm analog sound of the ’70s rather than staccato attack power chords and mouth-foaming aggression. Unlike TSOOL, there’s less Beatles and Stones in their record collections, more Sabbath and Iron Claw. But insistently catchy melodies are not quite as prevalent as with past efforts, though “The Apple And The Tree” and “Magnetic Shunk” make up for the faceless riffage of “Hard-Headed” or “From A Hole In The Wall.”

“Ain’t Fit For Living” was the penultimate track tonight, and  starts out with the line “I got no friends/Only people that I know.” Now that’s some bitter disaffection I can get behind, and the twin-powered guitars of Nilsson and Jonatan Ramm fuel the fist-pumping like a two-handed squirt of starter fluid on a lit propane grill. More of that, please.

Photo gallery of both bands (click on the pic for more): 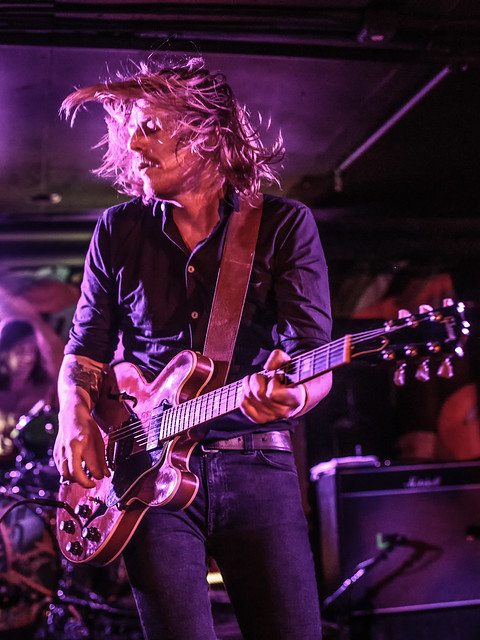