Green Day are nothing if not consistent. Having hammered out their template in the gritty environs of the hallowed all ages club 924 Gilman Street in Berkeley, they’ve softened some of the edges as they’ve moved through the last three decades while upping their stage presence considerably. Still, the familiar buzz saw guitar and pounding rhythm section combining to propel catchy melodies remains at their core. As part of their proper tour for Revolution Radio, Green Day hit the area just as St. Patrick’s Day was being celebrated by Irish and non-Irish alike, and Billie Joe Armstrong’s bright green carnation in the buttonhole of his vest signaled that he was not unaware of the calendar, despite the persistent monotony of touring when every day is Groundhog Day. I say “proper tour,” since you might recall the band making a visit to Boston late last year, as part of a club tour where they played venues significantly smaller than their normal shows. With the larger space provided by the DCU Center, the band was able to employ a center catwalk, pyrotechnics and cannon blasts, and four massive confetti cannons that blasted bits of paper emblazoned with ‘GREEN DAY,’ a parting gift stuck in the hair and jackets of fans as they made their exit. But that’s getting ahead of the story a bit. “Revolution Radio” marks a bit of a return for the band, their most solid collection of songs since 2004’s American Idiot, and “Bang Bang” and “Revolution Radio” delivered on preserving the pedigree of made Green Day the band they are.  Obviously their big hits were trotted out, and sometimes they got help. Aside from the first kid pulled out of the crowd to run down the catwalk and take a soaring dive into the audience, the next two participants were actually pressed into service. One lucky young person got to man the microphone for “Longview,” and immediately was comfortable in the spotlight, taking charge down the catwalk and concluding his guest stint by leaping from Tre Cool’s drum riser to the stage. The next lucky participant in the Make A Wish via Green Day foundation had Armstrong do a perfunctory run through of the chords to Operation Ivy’s “Knowledge” before handing him the instrument to take over. After the song was done, he told the stunned youngster that the guitar was his to keep.  After wrapping up with a mega-medley mashup of covers (Oh Danny Boy / Careless Whisper / Shout / Always Look on the Bright Side of Life / (I Can’t Get No) Satisfaction / Hey Jude), they wrapped up with a couple off the new record before hitting the obligatory encores. Punk rock might not be the most demanding musical style to play (let’s face it, it’s not like “American Idiot” is like playing “Heart of the Sunrise”) but the rhythm section of Tré Cool and Mike Dirnt keep things tight and always in the pocket. I also learned that Cool can high kick over his head, during his impromptu ballet segment. Meanwhile, Dirnt is the embodiment of Paul Simonon, with relentless optimism instead of dour cynicism. To close the show, Armstrong left his rhythm section behind and played a couple of solo acoustic songs; no surprise that “Good Riddance (Time Of Your Life)” ended the set. Armstrong spent much of the between song banter focusing on inclusion, and resisting the restrictions that prejudice impose on society, and it’s no coincidence that longtime punk band Against Me! is the hand-picked opener for the tour. The last time I saw the band leader (almost nine years to the day), she performed as Tom Gabel and opened for The Pogues. Her journey as Laura Jane Grace has been well-chronicled, and while the physical changes are significant, the band’s full-throttled punk rock attack remains unchanged, albeit with a different lyrical bent. 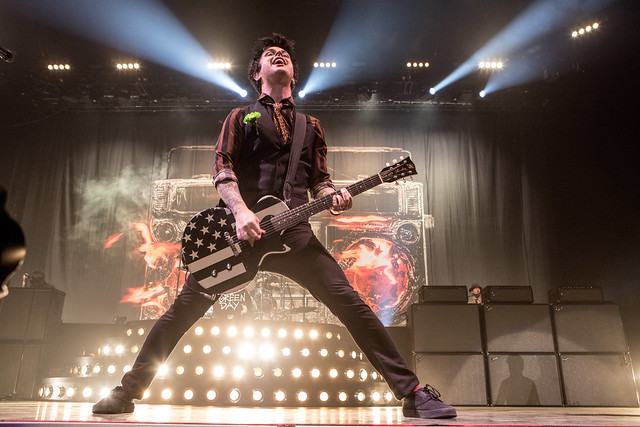