MC Taylor (of the Hiss Golden Messenger nom du stage) has been making a habit of hitting town, and specifically The Sinclair, around year’s end. Obviously last year didn’t happen, and early on during the set he said that he and his band came along to check in on everyone and see how they are. “How are you doing?” came a question back from the crowd. “Pretty fucking great” was his answer, and you could tell all involved were really having a good time. The people standing behind Taylor have changed up a bit, with longtime collaborator Phil Cook no longer manning the keyboards and/or guitar but the band didn’t suffer one iota. The rhythm section of Nicholas Falk on drums and Alex Bingham (along with Steve Belichik, trying his damnedest to make the mullet cool again) on bass was tight, supple and anchored the songs in the best way possible, while the keyboard fills of Sam Fribush supported the songs but never got in the way; Taylor would be a frequent visitor to Fribush, leaning over his keyboard with a giant grin. Lastly, the guitar work of Chris Boerner really elevated the energy of the band, but he never overplayed his hand. 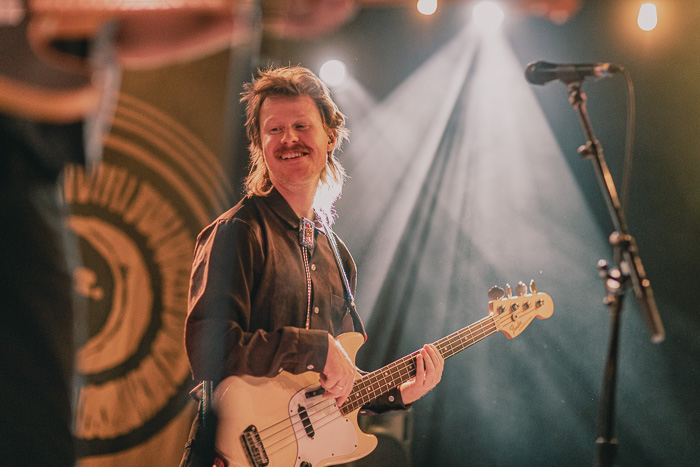 It being close to the holidays, one would have expected that a good dose of the recent holiday record would be played, but we got nothing! Instead, Taylor used tonight’s performance to do a pretty long and deep look back through his fairly extensive career. One slight nitpick I have about some of the recorded material is that it’s a bit light, a bit reserved, a bit too properly presented. Not so much tonight; the band gave a full-throated boost to Taylor’s songs, and they really came alive. In addition to the Dead cover that comprised the single song encore, Taylor also covered a song from Rosali, and as she’s the tour opener, not inviting her up to help sing her song would have been downright rude, and Taylor’s not that kind of guy. Speaking of, for her set Rosali was joined by guitarist Emily Robb to run through a selection of tracks from No Medium, her newest record. A high point was the fuzzed up “Pour Over Ice,” her paean to her now-defunct drinking habit. Middleman’s songs have dashes of Sharon Van Etten, structural similarities to Cate Le Bon, and a warm, honeyed vocal delivery that shares tonal qualities of Cat Power, all helping to bolster her songs. Personally I’d like to see her with a fully-fleshed out band as the duo didn’t quite deliver the same power as the recorded versions I’m familiar with. So come back to Boston soon, please!