The last (original) Stooge standing, Iggy’s back at it. Has he ever stopped? Nothing seems to be able to slow down this force of nature, not his outrageous actions on or off stage, his previously enormous appetite for drugs that would fell a small bison, or just general old age. Hell, he’s been eligible to join AARP for nearly two decades. And based on tonight, it doesn’t look like he’s ready to disappear in the Florida humidity like most people in his age group.

Energized by collaborations with Josh Homme and some other Queens of the Stone Age, Iggy put out his (by my count) 14th solo record recently, and hit the road for some select dates; thankfully Boston made the cut. With the instantly recognizable floor tom pounding intro, “Lust For Life” served not only as a blistering opening track but as an open game plan to how Iggy’s made his way through the years. Directly on the heels came the Berlin-era debauchery “Sister Midnight” that Iggy and Bowie incubated and hatched in the ’70s, and after launching into the new “American Valhalla,” tonight’s strategy was clear – heavy doses of Post Pop Depression, The Idiot, and Lust For Life. Nothing wrong with that at all, but as an avowed New Values advocate, I wished for a beating of “I’m Bored” or “Five Foot One.”

That combination had much less of the amphetamine-charged rawkus of The Stooges and much more of “a handful of Mandrax and clear me off the bathroom floor in the morning.” vibe going on. A languid “Nightclubbing” saw Homme with guitar cord in mouth (dominatrix leash? heroin tie-off?) and moments later, combing back his slicked hair. But the signature torso and playfully off-kilter slashes across the stage were always in effect, and when the energy lagged a bit from too many new songs, Iggy hit the throttle with “The Passenger.” A fan responded in kind by batting a blow up doll with a heart and Iggy drawn in sharpie across the sternum. If plastic dolls had sternums.

No Stooges songs were played, and that’s not a particularly a bad thing as 1) men wearing red sparkly suit coats should never play that material and 2) he’s trod over that material in convincing form with two lineups over the last decade. Now that both Ashetons are gone, it feels right to close that door.

That meant that the audience participation during “Real Cool Time” didn’t happen (to the consternation of security, Iggy would invite everyone on stage to dance), but he decided to do his own meet and greet during “Fall In Love With Me,” when he spent the entire song roaming aisles and singing, while Homme lit up a cig and held down the guitar parts. QOTSA was a pretty inspired match for Iggy’s material, the sleaze and oomph of Homme and company complementing Iggy’s material.

At this point, Iggy could certainly pull the plug on touring and he’s definitely earned a retirement if that’s what he wants. So if that’s the last time I hear his flat, Midwestern inflection, enjoy his crooked smile, and marvel at his coltish sashays across the stage, I’m ok with that.

Click on Mr Osterberg for more photos of the show: 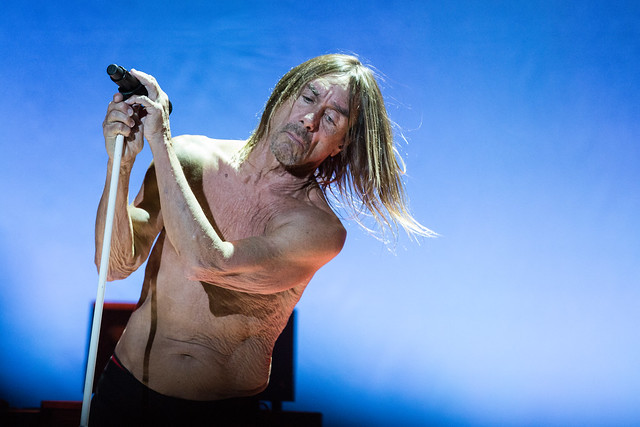