There are a lot of concept records out there by well-known bands, mainly in the prog or classic rock genre. But the metal genre is one area where this sort of storytelling gambit isn’t done so often. Sure, Mastodon got down first with Leviathan, a song cycle concerning Moby Dick and later with a time travelling paraplegic who interacted with Rasputin on Crack The Skye. One could also toss in sprawling epics from Opeth and the classic Operation Mindcrime from Queensrÿche (the umlauts make it even more legit), but ground zero points directly at the blackened, desolate soul of Abigail, the protagonist spirit of Diamond’s spectral tale.

If there’s one stylistic takeaway from either Mercyful Fate (singer Kim Bendix Petersen’s first band) or King Diamond, the band he named after his nom de stage, it’s the soaring, operatic vocals that dominate the proceedings. Pair that with theatrics that rival the best of Alice Cooper or KISS, and assemble a fantastically tight band all around it (guitar solo fetishist heaven) and you’ve got a winner. Diamond’s been much more active over the last two years, much to the delight and appreciation of a devoted following that brought inked skin, patch-encrusted battle vests and an endless supply of horns in the air as the story unfolded.  The set was broken into two sections, with a healthy chunk of King Diamond songs peppered with two classic Mercyful Fate songs. “Melissa” in particular was an early highlight; Diamond’s trademark crucifix microphone handle made of leg bones from a human skeleton he owned and dubbed Melissa. A road production of Abigail was attempted a while ago but this current tour includes every song from the record, with the overall stage production a highly entertaining affair.

Drawing opening duties was longtime Bay Area thrashers Exodus, who were celebrating three decades of their stone classic Bonded In Blood and celebrating the present with last year’s Blood In, Blood Out. Always a volatile lineup during their time, the band has had members drift in and out of other bands such as Metallica, Testament, and Slayer. And speaking of Slayer, longtime guitarist Gary Holt couldn’t make this tour as he’s busy on the road with King and Araya as the fill-in for the late Jeff Hanneman. Manning the mic was Steve Souza, who took a break from the band for a while but replaced former replacement Rob Dukes, who took over vocal duties from Souza for ten years starting in 2005. Souza lamented the lack of an open floor for pit activities, but tried his best to get people to self-mosh in their allocated seated position during their paean to that activity, “The Toxic Waltz.” 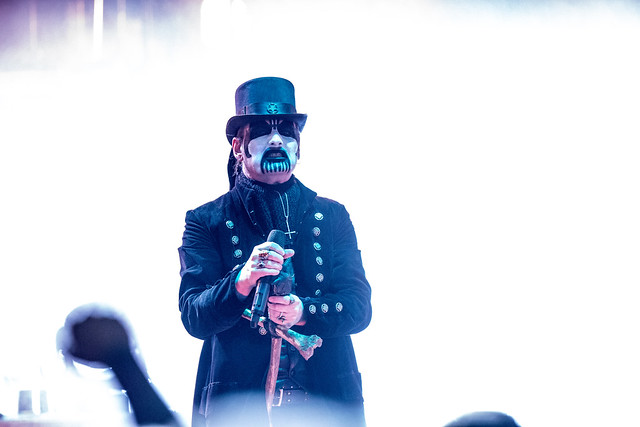