The fact that a sludge band hailing from a seacoast city in Georgia is now one of the most popular metal bands on the circuit wouldn’t be an obvious outcome, but Mastodon’s been working hard at their craft since their debut Remission popped out onto the world fifteen years ago. They wouldn’t forget these roots, forged in hot sticky weather and hordes of biting insects – “March of the Fire Ants” closed out their encore-less set with a punctuation mark. Obviously they’ve smoothed out some of those jagged edges as the years rolled on, and maybe they’ve lost some fans along the way as “Show Yourself” and “Steambreather” show a far more polished side of this four-legged beast. Judging from the packed environs of House of Blues, they’ve more than made up for that attrition, and especially led by the powerhouse drumming of Brann Dailor, they are still a band to keep an eye on.

Eagles Of Death Metal will always been linked to the atrocity of the Bataclan murders, which is a bit ironic because Jesse Hughes and company are all about the good times. Wide grins and hard rockin’ riffs are the centerpiece of their music, a classic dose of rock music as escapism and celebrating the moment with some friends at hand and maybe a smoke and a drink. Hughes has made some headlines in that aftermath with some pointed views but he kept his focus on the good fortune of having Mastodon hand-pick his band as tour mates, and even invited Brent Hinds on stage to jam on “I Only Want You” that kicked off their set. Can’t go wrong with a Bowie cover either, and “Moonage Daydream” was an inspired choice. Hughes celebrated the set by peeling off his “Even When I Lose, I Win” shirt and tossing it into the crowd. Russian Circles drew starting duties, with the engimatic Chicago trio eschewing all manner of vocal communication in favor of labyrinthine guitar work and monstrous waves of sound.  If you enjoy the stylings of Caspian, Mogwai, Explosions In The Sky, and that ilk, Russian Circles should be at the top of your next record store shopping list.

Click on Troy Sanders for photos of all of the bands: 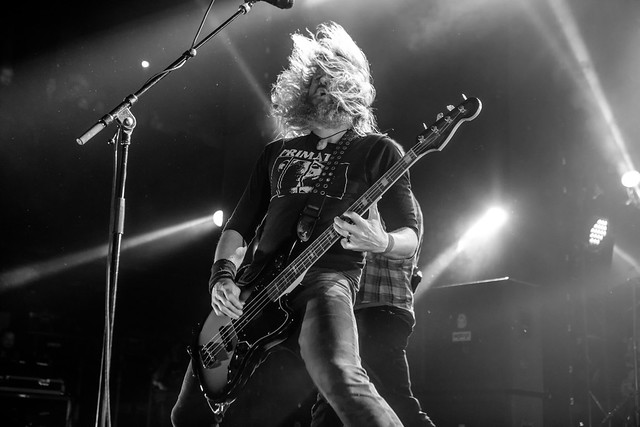