Sometimes getting there first is 90% of the battle. And if Mayhem sputtered to a close after their 1987 Deathcrush EP (a nascent black metal record that formed from the decaying husks of thrash, punk and metal), they still would have carved a noteworthy rune into the rock mantle. Their notoriety is firmly cemented by acts of suicide, off-hand cannibalism, and murder, but in the aftermath of all that sordid history, they actually managed to put out a pretty great debut record that became the template for countless black metal bands to follow. As you can imagine with the ensuing turmoil of what happened, they never had a chance to tour on De Mysteriis Dom Sathanas and decided that 2017 would be its belated coming out affair. The blast beats via Hellhammer, welded to the bass work of founding member Necrobutcher anchored the music, and Attila was a mysterious figure, cloaked in black rags and hiding in the fog and darkness of the stage; “Funeral Fog” isn’t just a song, it’s a lifestyle.

Long-running (almost as long as Mayhem, starting way back in 1988) black metal duo Inquisition prefers a much more primitive sound, just the howl of singer Dagon with his guitar skittering and slashing against the drumming of Incubus. Even as a two piece, Dagon made the most of the real estate by alternating time singing into microphones at either end of the stage. Openers Black Anvil have veered from their brutal roots forged in hardcore vets Kill Your Idols and have embraced some grandiose melodies and passages of clean singing that are draped over the backbone of blackened, sludgy riffs.  Not exactly what I’m looking for in my black metal bands, but they certainly have their fans.

Click on Necrobutcher for photos of all three bands: 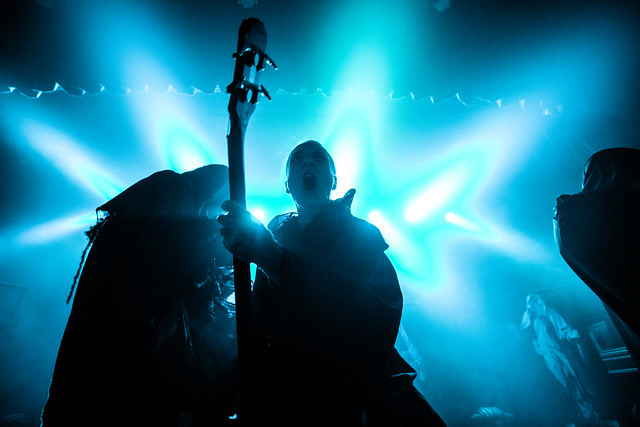