While there are plenty of examples where actors parlayed their success into political office, the same can’t quite be said of musicians taking that same path. There’s a pretty famous one, and one not so famous, and Peter Garrett definitely falls into the former category. The lanky, folliclely challenged front man of Midnight Oil is almost as well known as his activism as with the music he creates with his band mates, and after a pretty lengthy hiatus of fifteen years they decided to fire up the tour bus and hit stages around the world again.

As far as camaraderie goes, this Australian bunch must be pretty tight, as they trotted out the same lineup they’ve had since ’76, with the exception of newcomer Bones Hillman on bass, who joined the squad in ’87. For a band who’s been dormant for so long, they sounded like they just finished a previous world tour; launching straight into the raver “King Of The Mountain” showed where their head was at.  Garrett kept the political banter to a muted level tonight, with just veiled comments about Trump and some of the current world mess that’s dominating news cycles around the globe. Instead, he let the music do the talking, and the songs still hit hard. “Blue Sky Mine,” “Forgotten Years,” “The Dead Heart,” “When The Generals Talk” – the themes of economic disadvantage, war, repression of native peoples, all are still sadly relevant today. Stalking the stage and gyrating like a human-sized praying mantis that’s occasionally subjected to electric shocks, Garrett remains the visual focal point of the show but guitarists Jim Moginie and James Rotsey still deliver a blistering two guitar attack that was first forged by fellow Aussies such as Radio Birdman or The Saints. Hey guys, next time don’t be strangers for so long.

BOYTOY drew opening duties for this tour, and a sliver of hometown connection was present via Saara Untracht-Oakner, who used to play in indie popsters You Can Be A Wesley. She’s joined forces with Chase Noelle and Glenn Michael Van Dyke to form a trio that trades in catchy rock music. Eschewing the bass, Oakner tended to anchor the bottom end of the song with chords, leaving Van Dyke to scribble lines over the top while Noelle kept the time. 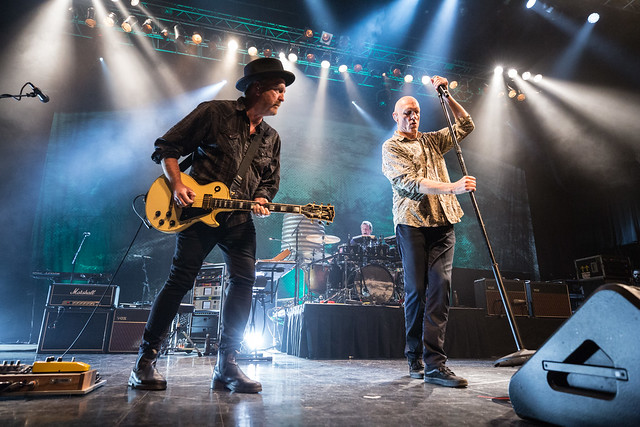