Wayne Coyne has done his share of attracting fellow fearless freaks for a while now, so it shouldn’t have been all that surprising when Miley Cyrus gravitated close enough to join Coyne’s orbit. As an acolyte, Cyrus quickly cottoned to the holy trinity of Coyne’s: sex, drugs, and music, preferably all mixed together. What else would you expect from the auteur whose first record label was called Lovely Sorts of Death, and whose videos are chock-full of naughty bits and controversy? You couldn’t squeeze in just one more chock if your life depended on it.

Before the stage was occupied, the PA pumped out the raunchfest of Lil’ Wayne’s “Rich As Fuck,” and when Coyne launched the first of several small confetti cannons into the air, it was game on. “Dooo It” is the lead track from the record, and the thick, deep beats underpinned the opening salvo of “Yeah I smoke pot, yeah I love peace/But I don’t give a fuck, I ain’t no hippy.” Cyrus came out with a multi-colored dreadlocked wig, standing tall on silver boots as dangling cords of lights adorned the top of the stage and a large video backdrop provided visuals. And then there were mushroom clouds of confetti, large plastic balloons, and a towering, half-naked (money bag pasties covering up her nipples) black woman with a gigantic rainbow afro, just like that dude who used to appear at the Monday Night Football games.  The bacchanal was on, and it didn’t let up over the next two hours.

Musically, the influence of Coyne and Drozd is pretty obvious, especially on the tracks “Something About Space Boots” and “The Floyd Song (Sunrise),” featuring languid melodies and the appropriate gauziness. Other tracks are easier to pick out where Miley took over; “Bang Me Box” is exactly what you think it’s about, and “I Forgive Yiew” has a ragged, sneering hip-hop edge to it. Two things were apparent from this show. First, Cyrus has a pretty good sense of humor, as evidenced with “Pablow The Blowfish,” a paean to her dead fish and how going out for a sushi lunch with her friends found her ordering soup and rice while her friends’ lunch made her unsettled. The other is how good a voice she’s got; clearly she’s from the pop game and has risen in the ranks pretty quickly, but the droney “Miley Tibetan Bowlzzz” let her vocals stand out, front and center, over the minimal synthscape and ringing frequencies of the bowl. 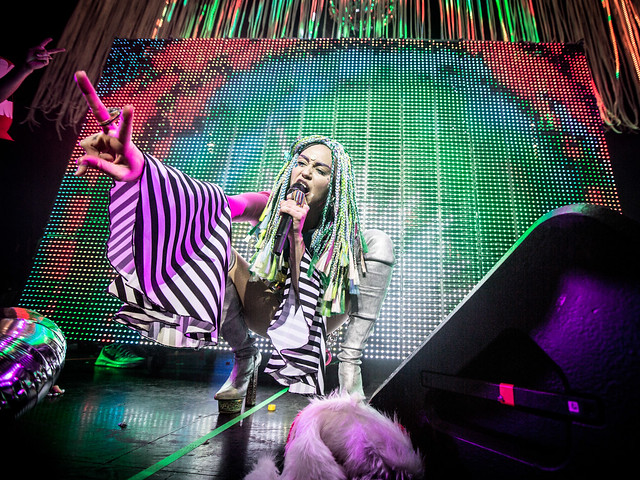