Assembling a career-spanning retrospective box set can be a risky move. Does it signal the stagnation of the creative muse, a sputtering end to close out some chapter? Or is it just a tidy way to transition to the next phase? Tonight, Case showed that she’s certainly in no danger of muse abandonment, nor drifting away from the ridiculously high quality bar she’s steadily maintained over her career.

The name of the her compilation comes from the roles she’s played over the years, from rote tasks of surviving on the road as a musician, to fiercely fighting for what and who she believes in, and her stubbornness to yield to others’ visions of what she should be doing or who she should be, with just one example being her feisty twitter exchange with Playboy a couple of years back.  The lineup tonight would have a rather glaring hole, with the heavenly harmonies (both in regards to vocals and sharp wit) of Kelly Hogan, and there was no drummer to anchor the beat either. However, the lighter touch worked well, especially on smoldering torch songs like “Look For Me (I’ll Be Around)” and the aching melancholy of “Ghost Wiring.” Long-time cohorts Tom V Ray (bass), Jon Rauhouse (pedal steel, guitar) and relative newcomer Eric Bachmann (guitar, vocals, keyboards) deftly worked with the beautifully full and vibrant vocals of Case throughout the evening.

Since the tour’s intent was to promote the box set, it wasn’t a surprise to see some obscurities pulled out, and the fans were treated to some inspired covers like “Duchess,” and “Andy.” She remarked that as a self-taught musician, the concept of changing keys came later and she was super proud of the fact that the mastery of that skill has allowed her to play material from her first record. As noted, her comic foil Hogan was missing, but that didn’t keep her sense of humor from popping out between songs. After playing “Middle Cyclone,” she remarked that “the music box is the world’s cutest instrument, but you wouldn’t believe how angry it makes TSA.” Before “Nothing To Remember,” which was on the soundtrack of The Hunger Games, she confessed that the song isn’t even on the box set. “We’re fucking frauds. But it’s a fun song to play.” She also gave Bachmann some spotlight time by letting the Archer of Loaf/Crooked Fingers composer play “Sleep All Summer,” a plangent tune that’s also been covered by The National with St. Vincent’s Annie Clark guesting.  It wasn’t all rarities, and some well-known songs like “Hold On, Hold On,” “Man” and “This Tornado Loves You” were well received.  Going in, I was a bit skeptical that the late change of venue from The Orpheum to the House of Blues would have a negative impact, but it felt more intimate, with the absence of aisles and chairs being a benefit rather than a hindrance to the show.

New York’s Felice Brothers took on opening duties, with their Celtic-tinged look on Americana being a nice match for the bill. Accordion and violin features prominently in their sound, a rough hewn and hearty mix that matched their sartorial choices of heavy work books and well-worn flannel and wool.

Photos of Neko Case and The Felice Brothers: 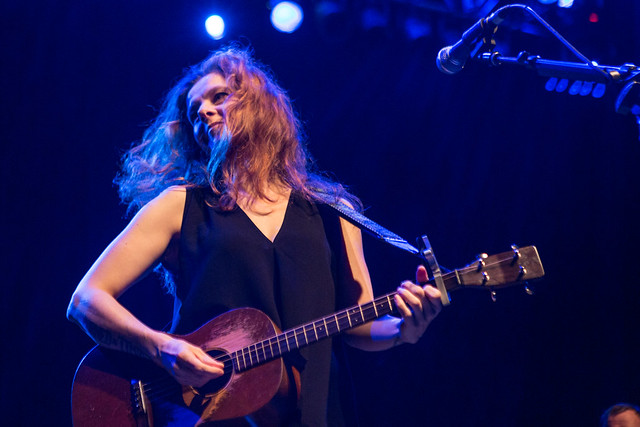