There is more than one way to remove the epidermis from a feline, and tonight, two bands from Texas and Stockholm showed the many varied gradations of how to go from point A to point B in the metal world. Opeth is touring the states in support of the just-released Sorceress, another point in their arc that departs further away from the death metal roots they forged at their beginning. Despite one particularly gung-ho crowd member continually yelling “BLOODBATH!,” Opeth leader and sole remaining founding member Mikael Akerfeldt didn’t bother dipping into his old side project for any contributions to the set list. But it wasn’t just a steady diet of new songs either, despite the release date of Sorceress occurring just two days ago, three songs were showcased while the rest of the set was a liberally democratic sprinkling of nine songs from nine different records, ignoring only the first two.

The Sword took the stage first, leader J.D. Cornise and company full shrouded in chemical fog and backlighting, nary a face to be seen. But the chunky, full-throated riff machine was certainly audible, especially the gut-rumbling low end, with bassist Bryan Richie augment his Rickenbacker with some sort of ultra-low end synth notes; the subwoofers could have double as fan units. As with Opeth, The Sword has also just released a new record, though Low Country is acoustic renderings of last year’s High Country, and they kept their Martins and Taylors off the stage in favor of their high-powered retro hard rock blasts, humbucker-style. The band gets lumped in with the doom crowd from time to time, but my ears tell me it’s just well-executed hard rock that was flooding the FM airwaves in the early 70s. Solid as a rock.

Click on the photo below for a photo gallery of both bands: 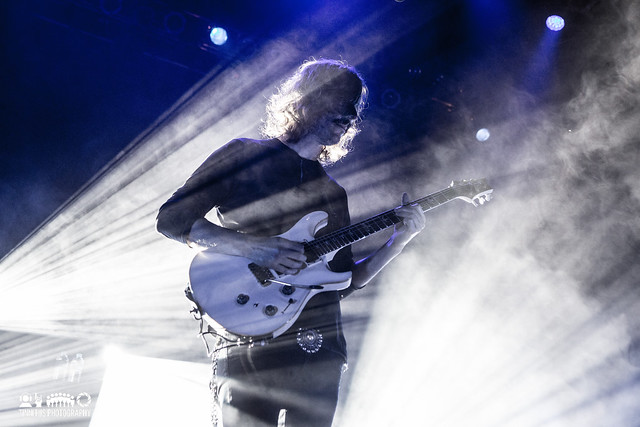