Not counting her 2009 show with collaborator for life John Parish, it’s been quite a while since PJ Harvey played a show in town. Thirteen years, to be exact, but who’s counting? Throngs of fans who braved the remnants of the receding tide of Sox fans and Marathon participants/supporters made their way through Kenmore Square, over to the House of Blues in anticipation. It was a bit odd that there was no opening act, but a glance at the empty stage set up told the story. Harvey brought an impressive band with her, nine strong, and instruments, amps, mics and other gear filled most of the stage; trying to set that up and do a line check after an opening act would provide a fertile breeding ground for technical glitches.

The show opened with a martial drum snare, and the band members snaked past the monitor mix desk, stage left, gradually taking their stations. Along with Parish, with whom Harvey has worked for nearly 30 years, familiar faces included ex-Bad Seeds Mick Harvey and James Johnston. Johnston was also the prime mover behind early 90’s bellowing, snarling Gallon Drunk, and ex-colleague Terry Edwards is now back as a current colleague.  There were drums, keyboards, and guitars and the usual ingredients of a rock show, but this wasn’t an ordinary concert. Though nostalgic types would like nothing better than Harvey to rip through “Dry,” “Dress,” Long Snake Moan,” etc – but the primal days of rock are behind, and she’s interested in other forms of musical expression.

A main ingredient would be the saxophone, sometimes three at a time. This gave a heft to the Hope Six Demolition Project material, matching up nicely with the percussive attack on “The Community Of Hope.” The more subtle politically-charged material (especially “A Line In The Sand” and “Let England Shake”) gradually gave way to a harder-edged finger jab at society via “The Wheel,” a lament of war cruelty via collateral damage, against a barrage of three saxes, four guitars, and a slew of hand claps. A floor tom tumbled off the drum riser, and that was a much easier fix than the 28,000 kids referenced in the song.

Harvey’s unrelenting vocal power came to the fore as “50 ft. Queenie” was unleashed onto the crowd, the band swathed in pale blue light as the song throbbed like a toothache. The set finished up with a small handful of older material, the gently swaying “Down By The Water” barely concealing the menace under the rippling surface, before dissolving into two harmonious sax lines. Harvey doesn’t traffic in the wallop of guitar/bass/drums any longer, but her muse and the art it produces is as strong as ever.

Click on the photo below to see the full gallery: 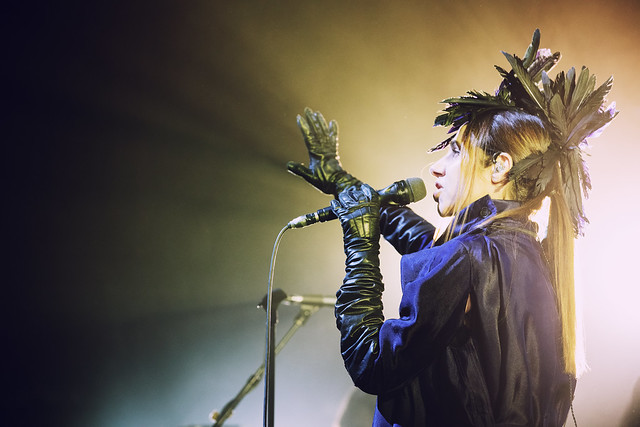