It’s been three years since the bearded men of Red Fang played town, and in the ensuing time, they’ve put out another record on Relapse. Perfect timing to hit the road again! Swarthy riffs, big driving beats and a compact approach remain their hallmark, and Only Ghosts doesn’t screw around with that winning formula. Guitarists Bryan Giles and David Sullivan look like they could have just left their day jobs at a tow operation, but seamlessly twist their guitar lines into a raging firestorm. “Wires” was the opener and it was more than effective as the spark to get the sold-out room churning. Lead vocalist and bass player Aaron Beam traded vocal lines with Giles and kept the bottom ended welded to John Sherman’s drum beats.  While Beam may look like a hip 4th grade teacher, he’s certainly not out of place at the center stage position. After someone came up to the stage with 4 PBRs for the band, the tour stop location wasn’t lost on him. “As you say in New England, cheers!” as he raised a can in appreciation. Good manners never go out of style.

Torche preceded Red Fang and leading up to this show, posts on leader Steve Brooks’ Facebook page seemed to hint that this might be their final tour. An immediate sign of flux was mainstay bass player Jonathan Nuñez at the outer flank playing guitar (asked after the show when he started playing guitar live, he said about a week). But Brooks didn’t mention anything between songs as they crunched out a healthy slice of thick, meaty rock, the sort of thing that Torche has excelled at over a quartet of records and a double fistful of EPs and singles. Brooks has to be winning the best mustache competition in rock right now, and if you need a ringer for your Movember team next year, give him a call for availability. There’s a prevalent amount of OOMPH in their material, but enough catchy melodies bleed out of the mix to grab your attention; the “whooah” chorus from “Healer” comes straight from the Naked Raygun playbook, and the pop sensibilities of “Kicking” are front and center. It’s not a surprise that one of their split EPs was devoted to Guided By Voices covers. After the show, Nuñez confirmed that Brooks had changed his mind and that they’d be working on a new record.

Whores. (yes, with a period. Probably makes google searches a bit more, uh, targeted) started the show with a jackhammer approach that recalled the halcyon days of Amphetamine Reptile or Touch and Go. If you were a fan of ’90s noise rock, then this Georgia trio is your new style of gum. The unhinged antics of a front man like Shannon Selberg, David Yow or Gibby Haynes isn’t present, though de facto leader Christian Lembach isn’t exactly a reserved type, and spent most of the time roaming the stage, sparring with bass player Casey Maxwell, crowding in on Donnie Adkinson’s kit, or leaning out of the crowd, whooping it up. They got off the line in a hurry, revving the show from 0 to 60 in scant seconds. Keep an eye on this band.

Click on the picture for photos of the show: 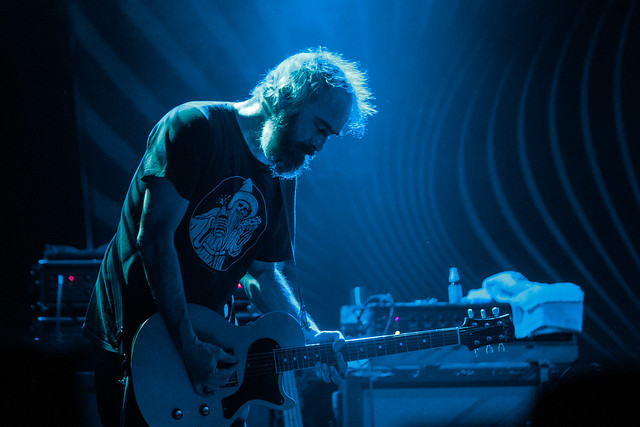