St. Vincent makes you sit up and take notice. We’ve not seen a shapeshifter of her skills since Bowie traded personas on a per album basis for over a decade, and with each reinvention, Annie Clark (the person behind the nom de stage of St. Vincent) keeps raising the bar higher and higher. Though her hair styles and clothing choices change like the weather on the West Irish coast, the one constant is her wildly inventive guitar style, a style that she honed to a scalpel’s edge during his studies here in town at Berklee. In a twist, she decided to open the show without her signature Ernie Ball Musicman guitar (one she helped design), just her voice and backing tracks on “Marry Me,” a dreamy pop ballad from her decade-old debut album.

And aside from the occasional roadie who would deliver another guitar in a variety of colors, the stage was all hers. No band, no set lists taped to the floor, no stage monitors. At first it was a bit unnerving for the eye and mind to process the full sound with just the slight figure of Clark, clad in hot pink latex with thigh-high boots, roaming about the expansive stage. But that feeling soon dissipated, because even if she had a ten piece band she would remain the singular focal point of the performance. The night was split into two sets, the first one taking a wide look at her previous three records over ten songs, ending with a trio from 2015’s eponymously titled record. The slithering “Rattlesnake” and “Digital Witness” belie her reliance on digital beats to generate the rhythm, and of the four times seeing her play, I don’t think I’ve ever seen her perform with a drummer.

The second part focused squarely on the new record, Masseduction. Playing it in the order, from “Hang On Me” through “Smoking Section,” the set was a triumph. Acknowledging her Berklee roots by giving shout outs to Allston, Roxbury and Jamaica Plain, she then stuck mainly to concentrating on the songs. Playing from a small dais in the middle of the stage, a large screen flashed images of Clark, in various forms. Sometimes it was her giant face, other times a behind the scenes look at a photo shoot with Clark as the subject. There was no getting away from that theme – Clark was the undisputed reason people were there, and she did not disappoint.

The new record has more purchase for which your ear to grab onto. The sing-songy bounce of “Pills” casts of a litany of our pharmaceutically-structured world, broken up by occasional bursts of guitar noise that might raise the eyebrow of Robert Fripp. Ending in a vocal coda that’s reminiscent of Else Torp’s guest turn on Nick Cave’s “Distant Sky,” the song seamlessly wraps together several of the disparate elements of Clark’s music into one cohesive package. The title track of the record is the crown jewel, a mix of Annie Lennox and Grace Jones that rails against the pervasiveness and subtle to overt control that advertising holds over us. Whatever Clark’s next move is, it’s definitely not going to be boring.

Click on the photo for more shots of the show: 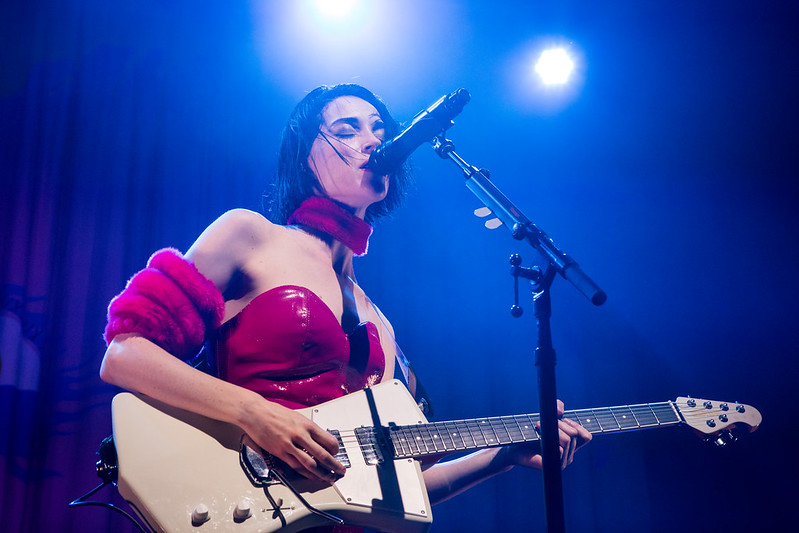