Exactly three years to the day, Steve Gunn and Lee Ranaldo return to Boston for a shared bill. The biggest difference is that they left their fellow bandmates back home and took the stage armed just with an acoustic guitar. Or in Ranaldo’s case, a handful of them in a road case at the back of the stage. Old Sonic Youth habits die hard, I suppose. I was a bit surprised to see Gunn taking the headlining spot, but last year’s Eyes On The Lines record follows up the excellent Way Out Weather and he’s been rightly winning accolades, from both the critics and the people who actually buy LPs, CDs and concert tickets.  His playing is fluid, and like many before him, he makes the difficult look simple, playing intricate finger-picked patterns in a very disarming, off-hand manner.

Lee Ranaldo played an interesting gambit by eschewing all of his recorded work and playing all new material, from his forthcoming record The Rising Tide, due out in May. Asked after the show, he confirmed that the record is a full-band recording, but here just the bone structures were showing, with a smattering of chimes the only accompaniment to his vocals and guitar. He’s got a really easy going manner, very talkative on stage and filling in some of the details around the songs before launching into them. We learned that the title cut referred to a small boat that a friend owned, which doubled as a hangout joint, sometimes burning joints as they bided the time. “Thrown Over The Wall” was being built over last summer, and Ranaldo joked that it would be a rallying cry for the Trump resistance, back when The Donald’s ascension to the presidency still seemed like a goofy prank. (Both Lee and Steve wore buttons with 2,864,974 emblazoned on them). Augmenting his open tuning, Ranaldo would loop parts and bowed his guitar during a song as well, bringing a full sound. The new stuff sounded good, so I’ll definitely be on the lookout for the full band tour once the record drops.

By contrast, SF via Philly resident Meg Baird kept her stage banter to the bare minimum and let the music do the talking for her. Even her physical manners contrasted sharply with both Gunn’s (standing, meandering around the stage only to approach the mic or pedals as needed) and Ranaldo’s (seated, but slipping and sliding around, legs keeping the beat, generally as animated as one can be from a seated position) as she perched up on the stool, eyes closed, and barely moved, aside from her fluttering fingers. Even though she’s switched to drums in her last two bands (Heron Oblivion; Watery Love), her talents as a guitarist are as clear as her pristine, breathy voice. Anyone with a passing interest in Brit Folk (a la Fairport, Pentangle, etc) needs to get acquainted with her first band Espers, and her solo records keep one foot rooted there, but also bring Americana into the mix. A heartfelt cover of fellow Philly friend Kurt Vile (“Classic Rock In Summer”) closed out her set. 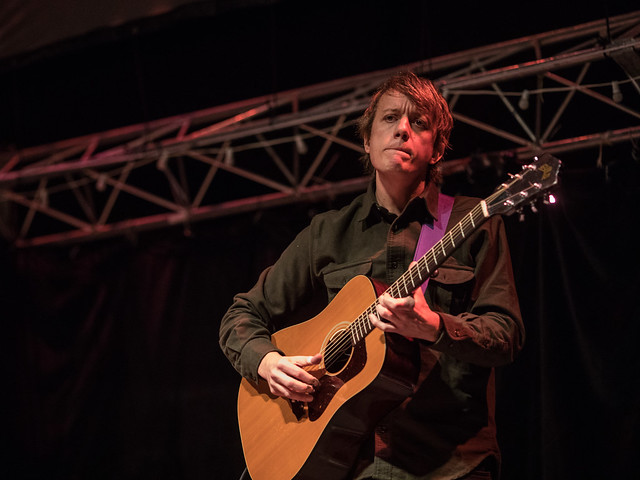