For a fictional town, Newbridge, New Jersey sure has a lot of vibrancy to it. It’s a magical place where Gene Simmons runs a Toyota dealership and Marky Ramone writes pulp romance novels. Look past the Lady Foot Locker or Lake Newbridge where Andy the Carp lives, and you’ll find a myriad of characters, all seemingly having the same vocal tone. One sounding suspiciously like the drummer from Superchunk, Mountain Goats, Bob Mould, and other bands. Yes, that’s Jon Wurster behind the curtain, with longtime partner Tom Scharpling playing the straight man. The duo have been responsible for the freewheeling cast of characters as heard on The Best Show, a weekly radio show on WFMU that started back in 2000 and called it quits nearly two years ago. But don’t fret, fans! It found new life as a podcast about a year later

As part of a prodigious look back at the archives, Scharpling spent a considerable amount of time what would coalesce into a staggeringly massive box set of the radio show, 16 CDs worth with extra goodies tucked in for good measure. And promotion of those sorts of things usually is done via hitting the road. But how does one do that with a radio show? Obviously the two have a pretty thick rolodex with their ties to the music industry, and at each town they’ve been having special guests as part of the show, in addition to the skits by regular characters of the show, played by Wurster. Tonight the house band consisted of Mike Gent (Figgs), Ed Valauskas (Q Division Studio manager), Eric Anderson and Josh Kantor, better known as the organist at Red Sox home games.

After an appearance by the current mayor of Newbridge and fan of all things Philadelphia, Philly Boy Roy, the house band ran through a roughshod cover of beloved local band Big Dipper’s  “All Going Out Together,” with Wurster on drums for the second part that ground to a halt when Scharpling wanted to add his two cents by playing a güiro. A skit featuring Q & A had Scharpling crouched behind the makeshift table that was previously used to make a smoothie, playing Gary the Squirrel. His guests were Kantor and Teen Beat impresario Mark Robinson, until the massive ego of the God of Thunder himself appeared, Gene Simmons. The ‘name that tune’ segment was very funny, as were all of the skits. For two guys who don’t do comedy as their main gig, they can really zero in on the location of the funny bone. 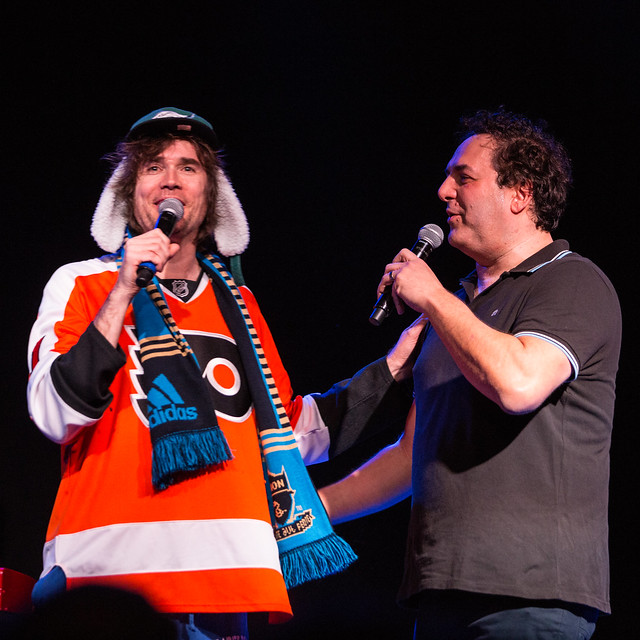