The Darkness launched into the rarified airs of rock stardom with their 2003 debut, Permission To Land, evoking the moves and sounds of fellow UK glam rock pioneers such as Queen, T Rex, and The Sweet. Brothers Justin and Dan Hawkins proved to be a formidable tag team on guitars, and the rhythm section was anchored by original bass player (and formidable mustache owner) Frankie Poullain, and newcomer Rufus Tiger Taylor, whose dad happened to play drums for – you guessed it, Queen.  Despite Justin downplaying his vocal ability by stating it was their third show in a row, this US tour closer demonstrated that he had plenty to spare in the pipes department. Flailing guitars, multi-octave vocals, wide striped jumpsuits, and the drummer hurdling over his kit – the show had it all, and the enthusiastic crowd loved it. I’m not sure that, as the title of their recent record declares that they are the last of their kind, but news reports of their demise are far in the future. 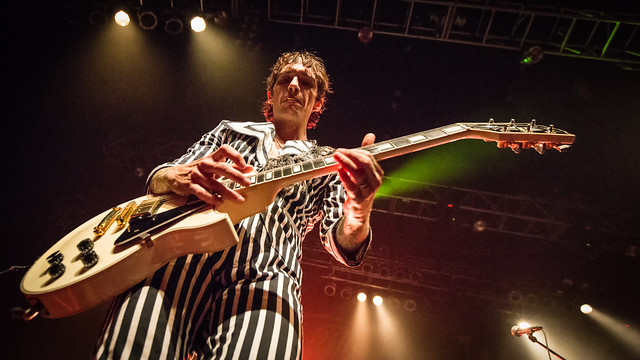