The term ‘lifer’ can have some negative connotations, an inference that it’s slog along the journey, a burden rather than a dream. But for others, it’s a lifestyle, a calling, and none quite underlines that ethos quite like Scott “Wino” Weinrich. If you scan the pages of the Encyclopedia of Doom Metal, you’ll find countless references to him as history of that Sabbath-fueled movement unfolded. Saint Vitus, The Hidden Hand, Spirit Caravan, Premonition 13, all the way back to the unrecorded Warhorse from the mid-’70s. The man has been involved with countless classic riffs and the first band who charted this course was The Obsessed. After a minor dalliance with resurrecting this band (a one-off reunion show at Roadburn in 2012; a Guy Pinhas-less lineup at Maryland Death Fest the year after), Wino has re-established the brand with a new record, the just-released Sacred.

The touchstones are there-the snarling vocal delivery, the hard crunch of chords that worm their way into your brain, and the thunderous rhythm section. A very early song “Sodden Jackyl,” dating from their first single in ’83 was dusted off and reworked for the record, and you’d never know that it predated other material by decades. Wino’s got a preternatural knack for creating music that is lasting, and while the formula doesn’t vary too much, why fuck with a winning recipe? You wouldn’t want something like apple pie to feature kale and cheddar cheese-stick with the basics.

The support cast was a great complement, courtesy of Grayskull Booking who know their way around crafting a solid metal bill. Karma To Burn took riffs to the most basic element possible by completely eschewing vocals and letting the amps and drum heads do the heavy lifting, aside from an out-of-the-blue “Tequila!” shouted out by guitarist William Mecum towards the end of their set. Lo-Pan took a similarly heavy approach, but the vocals of Jeff Martin have a subtlety and fluidity that you don’t expect from bands who typically steamroll their audiences. Local heros Gozu are just back from a West Coast tour, and they tightened their already tight delivery to a ridiculous level. Like Martin, singer/guitarist Marc Gaffney’s got a singing style that belies his physically foreboding appearance, while slinger Doug Sherman walks a razor-sharp line between the shred and the flash. Keep an eye out for a new record that should drop sometime this year. 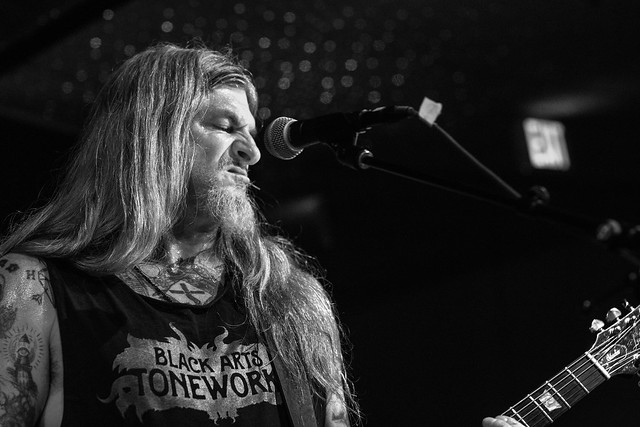