Thousands of anxious Replacements fans kept refreshing their inbox last Thursday as they awaited the news of the Converse Rubber Tracks ticket raffle results. Much like consumers of Willy Wonka’s chocolate bars, the ratio of elated winners to deflated losers  was pretty lopsided, but the lucky few who got into the cozy Sinclair for tonight’s show had supremely satisfied smiles on their faces. Expect this scene to repeat over the next four days as bands that command large fonts on festival posters take the stage in front of just over 500 people.

All of the dates also feature a Boston act that’s taken part in the Converse Rubber Tracks series, and brash young trio Young Leaves was a perfect stylistic match for the bill, a Tetris piece that didn’t even need rotation to make a dovetail fit. Once their brief, canine-baring set was over, the stage turned over to Dinosaur Jr., who’s been in the reunion/restart phase quite a bit longer than the ‘Mats. The stage was the familiar configuration of the pioneering power trio from the Pioneer Valley – the gleaming head of Murph dead center behind the kit, Lou Barlow to his left and to his right, in the cavern fashioned of Marshall stacks, was the sonic wizard known as J Mascis. Mascis’ guitar prowess is reputable and was ridden hard via the thundering drums and power chords of bass of “Tarpit.” Though their set clocked in a fairly brief hour, it was plenty of time to revisit old classics such as “Freak Scene,” newer ones in the making via the sublime “Pieces,” the MTV-era hit “Start Choppin'”, and even their well-loved cover of The Cure’s “Just Like Heaven.”

Sporting Lone Ranger masks and toothy grins, the Replacements (and their replacements, as David Minehan (Neighborhoods) and Josh Freese (Devo, Nine Inch Nails) joined Paul Westerberg and Tommy Stinson) took the stage to raucous applause from the stuffed-to-the-rafters Sinclair. The band was never known for their crack precision or dedication to the craft; their infamous The Shit Hits The Fans bootleg preserved that part of their legacy for future generations. Flubbed chord changes, forgotten lyrics, and impromptu segues into fragments of Sabbath and T. Rex covers would all be part of tonight’s show. If there was a catchphrase for the band, three chords and a cloud of dust would be as appropriate as any, though they moved from the rudimentary punk rock structure fairly quickly in their career. Introspective numbers such as “Unsatisfied,” precluded by Westerberg smashing his 12 string acoustic onto the floor into splinters, showed the tin and the yang of the band perfectly. Earlier in the set, Westerberg referred to the admission-free aspect of the night by saying “You’ll get your money’s worth – I guaran-fucking-tee it” and at show’s end there were no unsatisfied people among the horde that slowly exited into the rainy night. 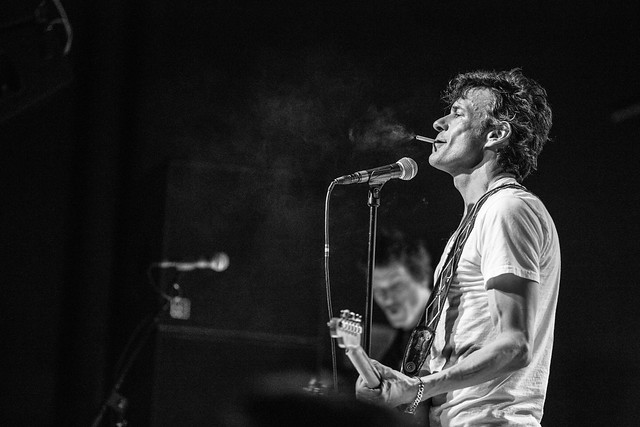