The Who hits fifty! …Two years ago. After much hoopla over their cancellation of last October’s dates due to singer Roger Daltrey’s viral meningitis, The Who are back and have somehow managed to stretch their long goodbye over the span of a two year tour.

Throughout their fifty-two year long career, The Who have had an incredibly rocky relationship with one another and, while they’ve always threatened to break up permanently, they’ve always come back. To see founding members Pete Townshend and Roger Daltrey take the stage with beaming smiles was a welcome sight for those yearning for one last chance to experience some maximum R&B.

Perhaps in an effort to show just how many hit singles they actually have, “Who Are You” was selected as their opening song. While steady radio play over the last forty years along with a currently 15 year stint as the CSI theme song may have slightly dulled the song’s edges, The Who still came roaring out of the gate. After making a name for themselves as one of rock’s loudest bands in the 60s, they still make arenas sound rather puny.

Any doubts due to their age are instantly dispelled as they sound pretty brilliant. Much has been made about the quality of Daltrey’s voice, but he sounds delightfully growly tonight. Like a hungry bear tearing into raw meat, he ripped into “The Seeker” with a new found passion. More importantly he still has the energy and the raw power that has always defined The Who’s existence.

Projected behind them are pop art imagery that mostly focused on their earlier Mod years along with their post-Woodstock pomp. While the imagery was charming as a backdrop to earlier songs such as “The Kids Are Alright”, they seemed rather out of place during some of their later ’70s and early ’80s cuts.

It was also a constant reminder of their two missing bandmates. While Keith Moon and John Entwistle are certainly irreplaceable, bassist Pino Palladino and drummer Zak Starkey (son of Ringo Starkey) have made a herculean effort over the past decade. Palladino, one of music’s most sought after bassists, was stoic as ever as he effortlessly worked his way through “My Generation”’s iconic bass solo and “The Real Me”’s bass heavy verses. Starkey, decked out in a Toots and The Maytals shirt, was almost Moon resurrected, thundering through each song with style that followed Moon’s spirit while still imbuing it with his own personality.

After visiting Quadrophenia in its entirety last time they stopped in Boston, The Who are now firmly in greatest hits mode. They skipped around their discography, jarringly placing ’60s mod cuts like “Pictures of Lily” next to their more middle of the road singles like “Behind Blue Eyes”. Sonically, there was a marked difference between the two styles: The Who when they were a quintessentially British band in the ’60s and The Who when they were a world conquering arena act in the ’70s.

Earlier cuts such as “The Kids Are Alright” and “I Can See For Miles” crackled with the energy of a thousand power pop bands forming at once, though the biggest responses were saved for their ’70s hits. “Join Together”, a sometimes forgotten single from ‘72, prompted a mass singalong and “Bargain” see-sawed between a swooning bridge and heavy rock verses.

They have, however, wisely skipped over nearly every decade since then. “You Better You Bet” was certainly a crowd pleaser, but it didn’t quite rumble the TD in the same way their earlier material did. A handful of missing singles (“I Can’t Explain”, “I’m A Boy”, “5:15”, “Anyway Anyhow Anywhere”) would have been more than welcome.

While The Who were initially a strong singles band, they pushed the limits of the album format with rock operas Tommy and Quadrophenia. The two albums were represented by short, but sweet medleys that touched upon some of the albums’ more powerful moments. “Pinball Wizard” was, of course, the centre piece of their Tommy segment that concluded with the inevitable “See Me, Feel Me/Listening To You”. Quadrophenia was represented by “The Real Me” earlier in the set and then “I’m One”, “The Rock”, and “Love Reign O’er Me”. The most powerful moment of their set, “Love Reign O’er”, was simply breathtaking. With the band firing on all cylinders behind him, Daltrey yelped and screamed like the angst-ridden Mod he was once. However, forcing a serviceable but ultimately dull “Eminence Front” between the two medleys was a somewhat flattening moment.

The final litmus test for Daltrey’s voice was not one, but two songs: A closing duo of “Baba O’Riley” and “Won’t Get Fooled Again”. Not only are they their biggest hits, but the two still stand as some of the most innovative rock songs from the ’70s thanks to Townshend’s early use of the ARP synthesizer. Daltrey’s iconic scream at the tail end of “Won’t Get Fooled Again” was passed with flying colors. Fifty-two years in the can, but there doesn’t seem any need to call it a day. The passion and fury that catapulted The Who to controversy and stardom still burn fiercely within Daltrey and Townshend. Here’s to another fifty?

See our photo gallery below: 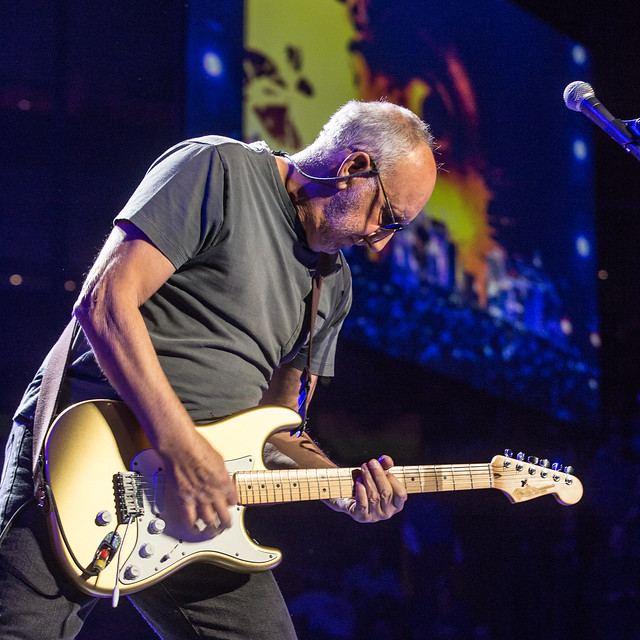