Ty Segall is a rock star. There’s no other way around it. Not in the “don’t spill the beluga and Cristal in the back of the Rolls-Royce” sort, but more in the approach of doing exactly what he wants to, and having a large (and getting larger) audience ready to receive it and toss their energy right back to him. The ascent of Segall’s been gaining momentum for a few records now, and it’s hard to pinpoint the turning point from when he was toiling away in garage obscurity with Epsilons a decade ago to the world of today, when he’s filling large venues with enthusiastic hordes ready to receive their communion. Was it Melted, which was the first record that poked its way into my consciousness, or perhaps it was Goodbye Bread, the follow up on his current label Drag City. Regardless, he’s been ascending in a logarithmic fashion, and it’ll be interesting to see if he can maintain the fragile balance of intimacy and connection with the live audience when the venues get bigger and bigger.

Segall’s certainly been fond of picking some Grade A meat from the bones of Marc Bolan’s or The Sonics’ carcasses, but Emotional Mugger shows the No Wave side of his creative process. The lurching synth lines of “Squealer” kick off the show as a jumpsuit clad Segall strides to the stage, a rubber mask over his head and a bunch of bananas in one hand. It’s feeding time. Whether or not the mask is a direct homage to Ohio’s most famous spuds Devo, the parallels to Booji Boy are pretty clear; it got weirder when Segall started flogging the stage floor with what looked to be an umbilical cord. Whereas Manipulator had some razor sharp riffs and ultra-catchy melodies, the new material is not nearly as earworm-friendly. The crowd, however, was certainly plugged into whatever socket Segall’s crafted, and the floor became a jammed, throbbing organism that thrived on the songs. “Candy Sam” is probably the closest to the classic hook formula he’s nailed down, with squiggles and flourishes from Cory Hanson’s keyboard. Segall’s constant cohort Mikal Cronin was manning the bass position as always, but for this tour King Tuff (aka Kyle Thomas) and Emmett Kelly (Cairo Gang) free up Segall to drop the guitar and prowl around the edges of the stage (and into the crowd) at will. The crowd reciprocated, with a seemingly endless barrage of stage divers that increased as the show went on. One helpful hint – it’s not your stage, so get on with your business. One lingering stage diver had his shoe taken off by Segall and discarded towards the back of the stage.

The Mugger material ended with album closer “The Magazine,”  synchronized clapping from the crowd over the spastic solo that Kelly smeared through his strings, and the energy picked up a notch or two with some stellar cuts from Twins and Manipulator, especially on “Thank God For Sinners” and “Feel,” which has the greatest one note guitar solo this side of “Down By The River.” Whatever Segall’s next move will be is anyone’s guess, but I’m sure it’ll be worth checking out.

Charles Moothart is another one of the tight-knit cabal that Segall’s created. As an original member of Epsilons, his history with Ty traces back to high school, and lately he’s been done double duty as a member of Ty Segall Band as well as Fuzz. Over the last several months he did some woodshedding and ended up creating a record of his own (read our interview with him here if you haven’t yet) and he tapped fellow Segall inner circle member/ex-Epsilon Michael Anderson and a couple of other friends to pull together a touring band. Moothart can play guitar; of that there is no doubt. A mid-gauge guitar string fell victim in the first song, but that didn’t stop any of the momentum as Moothart and mates cranked through the songs. “Brain Of Clay” has a very Fuzz-like approach, whereas “Clearly Confusion” fills the room with a jaunty rhythm, a half-step drop still carrying some subtle Sabbathisms to the song. The record, Still Life With Slime And Citrus drops in April via In The Red, so keep an eye out.

Boston’s own Midriffs (clever name, that) opened the show, and did a more than passable job of convincing me to find their bandcamp page the following day and buy their debut record. High energy psych-guitar, with a front man that looked a bit like Scorpio from Dirty Harry while playing a brand of muscular guitar that had flecks of the surfier/non-hardcore sound of Dead Kennedys’ East Bay Ray. Solid action.

Photo gallery of all the bands: 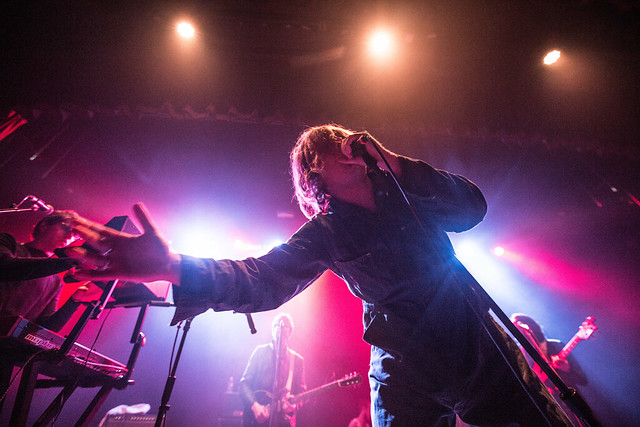