It’s rare for a side project to vault to the top of the priority list, but in Ultimate Painting’s case, it’s hard to argue against it. As far as emphasis on priority, it’s not entirely true; co-leader Jack Cooper continues to release work with Mazes, but Veronica Falls has seemingly hit a bit of a hiatus, leaving James Hoare free to put his talents towards this union with Cooper. 2016 finds them releasing their third record, _Dusk_, and as on prior tours they’ve enlisted a rhythm section to hit the road. The brittle, jangly pop derives heavily from the Velvet Underground but in all the best ways. Not a slavish note-by-note tracing, but more of kindling to stoke their own fire, reminiscent of the early 80s Flying Nun bands who took similar inspiration from the Velvets but made it their own. Veering mainly on the Reed side of things, the quartet kept it in the “Rock And Roll” pocket, a chugging mid-tempo jangle-fest. That strategy changed at the last song, “Ten Street,” when full-on Sister Ray attack was displayed, the closest thing I’ll ever see to what I imagine Spacemen 3 sounded like their prime. (I’m still sore at US customs not granting their visas in 1989, when I had tickets to see them at The Rat).

The rest of the bill, expertly assembled by Illegally Blind, featured three other bands who all shared similarities in their approaches, yet with enough variance to make each stand on their own. Hailing from NYC, EZTV is a fresh-faced quartet with two full-lengths out via Captured Tracks. If we’re gonna continue the Flying Nun comparisons, they’d land squarely overlapping the poppy territory that Sneaky Feelings mapped out. Doug Tuttle and his band staked a very hard claim on the acid psych pop sound of the 60s West Coast bands, full of jangle and breathy vocals. The other side of that coin is their capability of turning on said dime and stirring up moody vibes, with “It Calls On Me” and “Falling To Believe” making a strong impression. Now with two excellent records out on Trouble In Mind records, they’re the real deal. I only caught the tail end of John Andrew & The Yawns, but a pleasant, plangent sound was effortlessly summoned, with Andrew’s high-register vocals soaring over the top.

Click on the photo below for a gallery of photos from the show: 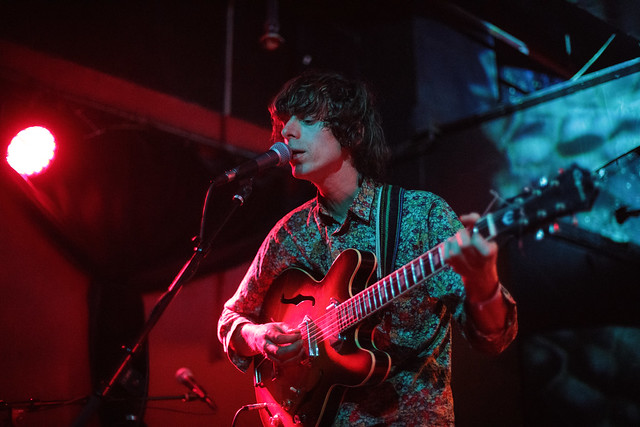