After a two year period of woodshedding, Warpaint emerged with their third full length record, and as bands do even the shambles of the music industry falling in all around them, they hit the road in support of Heads Up. Slowly but surely, they’ve inched away from the sparse, spidery post-punk sound that was so prevalent in their first 12″ and subsequent debut LP, The Fool, and have taken to more of a rhythmic approach. The use of drum pads and other electronic beats is a bit puzzling as the band’s got an absolute first rate drummer in Stella Mozgawa; I can’t speak for her thoughts, but maybe this is the same process that Jonny Greenwood went through starting with Kid A.

“New Song” is definitely among the catchiest dance-oriented songs they’ve done, stretching the direction that “Disco//Very” to a new milestone off in the distance. While rhythmic elements have always been front and center to their sound, courtesy of Jenny Lee Lindberg pairing with Mozgawa to form a most formidable rhythm section, it’s been more ESG or Liquid Liquid, with elements of dub and early hip-hop prevalent. Not to say that they’ve abandoned that for potential club bangers; the closing “So Good” keeps a steady hand on the rudder so that those waters are not left behind (and also featured Theresa Wayman swapping her trademark Fender Mustang for a bass), and “Heads Up” had a lithe, supple bass line that was reminiscent of “A Forest,” darting between trees and nimbly jumping over logs, never getting tripped up.

The vocals also continue to be a strong component of their sound, with Wayman and Emily Kokal taking most of the leads, but everyone pitching in to create a beautiful weave. Kokal in particular seemed to be struggling with the venue sound, alternating between using her in-ear monitor or just letting it dangle over her shoulder, with frequent sidebar conversations with their front of house sound person. That said, there wasn’t any obvious holes in the PA mix, with plenty of space between Kokal’s and Wayman’s guitars.  And speaking of which, the extended version of “Intro” sounded fantastic; more of that sort of interplay, please!

Facial took the stage first, three brash guys from LA who spent about as much time joking around and swapping instruments as they did blasting out their fuzzed-out take on punked up garage rock. And they gave good advice for anyone looking to google their band name later. “Our site is fuckfacial.org and the dot org bit is very important. We don’t know what sort of you think you might find if you don’t type that.”

Photos of the both bands are available here, click below: 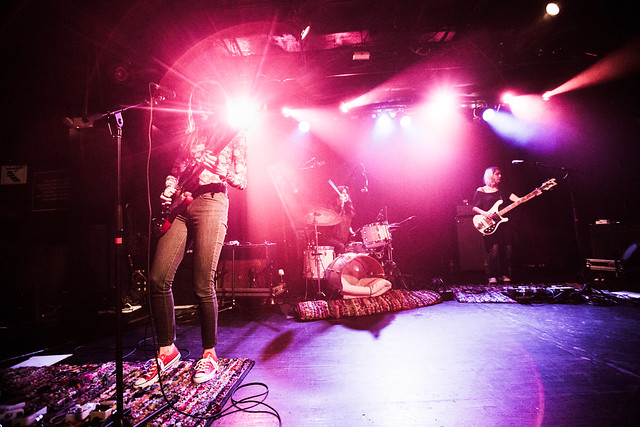