On the surface, Wilco and Sleater-Kinney seem like a rather odd pairing of alt-countryish middle-aged rockers and seminal riot grrls but after 150 minutes of guitar pummeling, I’ve seen the light.  A Covid casualty from last year, they finally brought their postponed co-headlining tour to Boston, and there were precautions in place to keep everyone safe in the form of vaccination proof or negative test results no older than 3 days. (With the dominos starting to fall and shows being canceled again, I hope that vaccination-only is the criteria going forward. The music industry can’t afford another shutdown, but that’s another post for another time.) Local Wilco fans have come to expect a lot from the band, and the band routinely delivers. Aside from being spoiled by living within a two hour drive of their fabulous Solid Sound Festival, one of the best Wilco shows ever happened at The Orpheum when “an evening with” turned into a 39 song marathon and Tweedy announced from the stage that the festival would be happening in a few months. So, what was the verdict?

Well, Wilco fans were kinda split, with the biggest gripe related to time. As a co-headliner with an opening act on top of that, their usual 2-2.5 hr set was truncated to a brisk 90 minute time slot. And since there were a decent amount of S-K fans that may not be overly familiar with the band, they kinda played it safe with the set list choices too. Don’t get me wrong, “Jesus Etc,” “California Stars,” “Heavy Metal Drummer” (done with a pretty hilarious spoken word intro by Tweedy who was otherwise light on his legendary stage banter) and “Impossible Germany” are all solid songs but most diehards would be fine if substitutions were made. That said, “Jesus Etc” remains a really fun singalong and the resolution/payoff of “Impossible Germany” still delivers; I swear I even saw Nels Cline do a little jump during it.

Cline’s talent is prodigious and endlessly creative, coaxing tones and textures via his long fingers like some sort of sonic sorcerer, and Tweedy is no slouch himself, showcased on the blistering “At Least That’s What You Said.” Pat Sansone tends to get a lot less of the limelight as he shuffles from keyboards to guitar or banjo but he’s a truly capable player, and showed off some chops during “Box Full Of Letters.” The punchline here is that not even the video feed guy was watching him and instead had his lens trained on Cline. Cue Rodney Dangerfield. Earlier that day, news broke of Charlie Watts’ unfortunate passing, and the band played tribute in a couple of ways. Glenn Kotche had “Charlie Is My Darling” emblazoned on his kick drum, and as Sansone tapped out a familiar cowbell refrain, Corin Tucker came out to lend her voice on a rousing version of “Honky Tonk Women” which perfectly segued into “The Late Greats.” Well done, Wilco – you’re always looking at the big picture while still taking care of the small details. Sleater-Kinney started out as a three piece and is currently double in size, recruiting an additional guitarist, bass player and keyboardist. Crucially, longtime drummer Janet Weiss parted ways with founders Tucker and Carrie Brownstein after the St Vincent-produced The Center Won’t Hold record in 2019, and while “Rollercoaster” wasn’t played, the lyrics of “We had a good time at the beginning/…/Rollercoaster, want to go back to the way things were” seemed rather prescient. The band also focused on later material, eschewing any material from their first five records. The fire was still there in spurts though, especially on “Jumpers” and “One Beat” had the unbeatable pairing of unflinching vocals with guitars bent on destruction. Opener NNAMDÏ set a loose groove to get the night going, reminding a bit of a less R&B-soaked Moses Sumney and bringing a keen observational eye to his songs. Carrying a satchel slung around his shoulder, he asked the crowd to guess what was in it but alas not one person correctly guessed a lobster. I hope it was tasty! 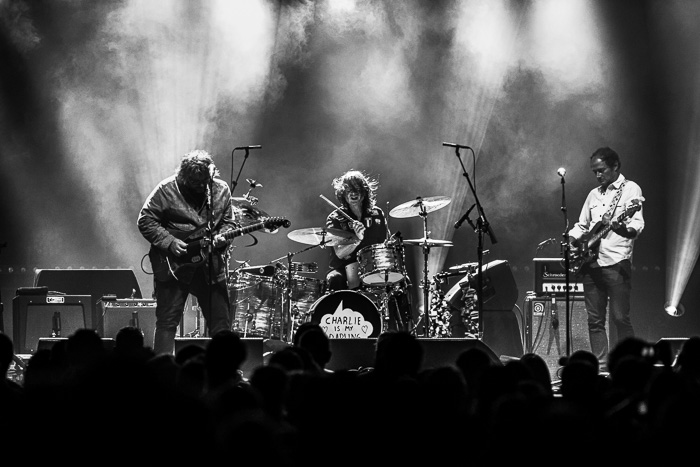