When a band is nine records deep into their career, there are certain expectations regarding the set lists. Sure, the fans want to hear some new material, but they also want some well-worn chestnuts that have nestled into their lives like a comfy pair of slippers, not some boots you have to break in. So it’s pretty unusual to see a band that’s fearless and confident enough to hit the audience with all the new songs, right out of the starting gate. Wilco is not your average band, and the fans who jammed the dusty old bones of the Orpheum to the creaking point for two consecutive nights wouldn’t have it any other way.

The band surprised everyone this summer when Star Wars was given away as a free digital download without warning. In some ways it hearkened back to the sounds of the Loose Fur records that Tweedy and drummer Glenn Kotche did with Jim O’Rourke, who was brought into the fold as the engineer of the much-heralded Yankee Hotel Foxtrot. “Where Do I Begin” ended with a percussive attack by Kotche that  would coax a smile from Milford Graves, and segued perfectly into “Cold Slope,” with some free playing of Nels Cline joining Kotche before the song slipped into a sparse groove.  A warm, Beatles-esque “Magnetized” closed out the material from the new record, and then it was time to plunder the extensive songbook of the band.

Last year, the band released a comprehensive anthology of the various b sides, compilation contributions, and other material that never made it to a proper LP, and the live shows were generously peppered with deep cuts and relative obscurities. That would not be the case in Boston, with the band concentrating on songs that are core to their live repertoire. Walking out of a show without hearing “I Am Trying To Break Your Heart,” “Impossible Germany” or “I’m The Man Who Loves You” is mathematically possible, but then again so is winning Powerball. I’m really not sure if Wilco can be classified as a jam band, but they do have a tendency to play around with the songs at times, stretching and pulling them slightly, but not to the extent where they become unrecognizable. “I Am Trying To Break Your Heart” concluded with a chaotic blast of percussion and whatever electronic voodoo Cline felt like doling out, somewhat akin to the live version of “Via Chicago.” “Camera” (without the ‘K’) was an insistent, brash version as compared to the simpler, heart-on-sleeve recorded version.

Both nights featured great songs and playing, but the second night edged out the first when the post-Star Wars set kicked out with “Spiders (Kidsmoke),” an electric version that was scratched from the printed set list of Friday. Minimal Krautrock rhythms set the table, an insistent throb that exploded into a beautifully bombastic riff that is still reverberating somewhere in the recesses of Downtown Crossing. Cline gets a lot of praise and ink for his formidable skills on the guitar (well deserved, natch), both in technical precision and free-form creation but some people may lose sight of the fact that Tweedy did the bulk of the heavy lifting regarding guitar on A Ghost Is Born, and he pulled some final boss level shit on this track. Moments like these are what keep people going to concerts; it’s better than any drug one can find.

Let’s not forget the contributions of John Stirratt, Mikael Jorgensen or Pat Sansone either. Any member of Wilco would be in the starting lineup of any band you can think of, and to Sansone’s credit, he’s comfortable taking the back seat when needed, filling in with keyboards, vocals and guitar. He’s also an accomplished player in his own right, and positively ripped the lead of “Box Full Of Letters” effortlessly. Whereas Cline’s record collection is likely filled with Derek Bailey and Sonny Sharrock LPs, Sansone’s has to have a healthy dose of The Faces, Big Star and The Band, and that mixture is one of the secrets to what makes this band so great. Stirratt’s the only original Wilco member left who’s not named Tweedy, and got a huge reception during Saturday’s encore when his “It’s Just That Simple” from the debut record AM was played. While his seamless vocals are a key factor to the band’s sound, his bass playing can get overlooked with all the six string shredding going on all around him; “Art Of Almost” underscored his rhythmic talents quite well.

Last year, at the festival they created, they devoted the first show with a fully acoustic set and that concept’s got some lasting power. Both nights closed down hootenanny style, with Tweedy and Stirratt on acoustic guitars, circling a shared microphone while Kotche found his brushes, Sansone picked up a guitjo, Jorgensen alternated between twelve string acoustic and melodica, and Cline played a dobro with a slide, and occasionally a spring. Quite a sublime way to end both evenings, like a vintage cognac.

William Tyler was part of last year’s Solid Sound event, and was tapped to pull opening duties for the first part of the tour. Sitting down and playing solo, he was able to create worlds of mystery with his six strings. He’s contributed his talents to some vital records by Silver Jews, Lambchop, and David Kilgour, but he’s also an accomplished composer in his own right. The opening song “Missionary Ridge” was a direct glance into the John Fahey songbook, and he was creative with looping tracks and building layers on top of each other. “Tears and Saints” and “Cadillac Desert” featured electric rather than acoustic guitar, and was augmented by bowed sections that were looped, tremolo bar action, and even a small handheld power tool that was applied to the strings. Before starting “Venus And Aquarius,” he mentioned that it was a new song, and a love song, one he dedicated to the late Paul Kantner, commenting that Jefferson Airplane was a key reason he started playing music. Keep an eye out for a new record, slated to drop sometime this year.

Slideshow of photos from both nights (click on Jeff): 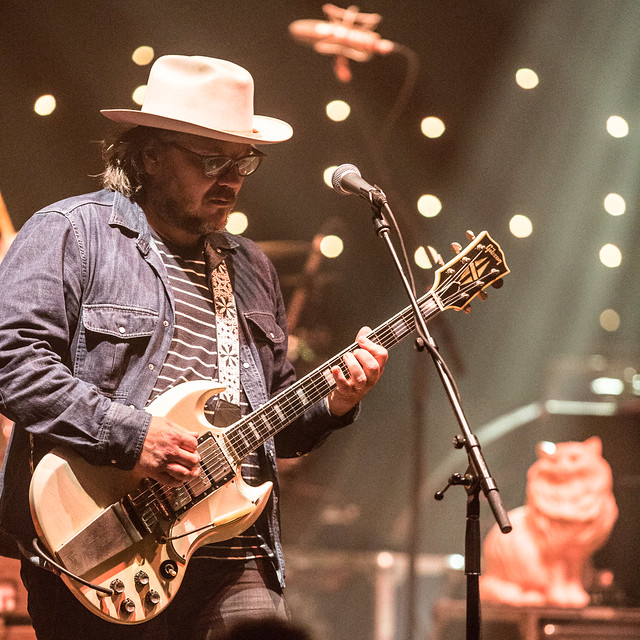