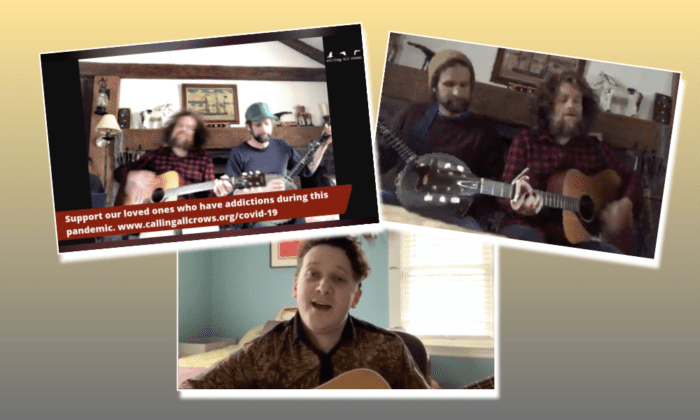 “Another benefit for everyone involved is that assisting others is a good outlet for dealing with the stress created by the pandemic that we all feel.”

It’s crazy to say out loud, but it’s common knowledge that all music venues, restaurants, and bars are shut down, while large gatherings are forbidden these days. Just walk outside and you’ll see that your hometown has become a ghost town due to COVID-19 concerns and precautions.

Because of the situation, countless musicians and bands have resorted to live streaming performances online. Via social media outlets like Facebook and Instagram, famous acts and unknown upstarts have been taking us into their living rooms, basements, and home studios, with a lot of artists playing for donations to their PayPal or Venmo accounts, and others simply doing it for fun.

Will Dailey’s Isolation Tour has benefitted the likes of Zumix, while Sherborn native Chadwick Stokes of the roots rock trio Dispatch and reggae punks State Radio is streaming to fuel his two passions in life: music and activism. Each day this week at 5pm, Stokes has done what he is calling Daily Service Projects through the Facebook page of his pro-public service and pro-human rights activist group Calling All Crows. Along with these initiatives, Stokes also plays some tunes.

“We felt it was really important for Calling All Crows to create community and help vulnerable people during this unprecedented time,” he said about his virtual approach. “Since we can’t do our outreach at live music venues right now, we decided the livestreamed service project idea was a good one. Everyday at 5pm we have gathered online with a few songs and resources to encourage fans to advocate for populations who are particularly vulnerable at this time—like seniors, incarcerated people, domestic workers, and those who may be suffering from domestic abuse to name a few.”

“Next week we will probably go to a three day per week format, as well as hope to host a series of longer live streams with similar themes and other artist involvement,” Stokes added. “Another benefit for everyone involved is that assisting others is a good outlet for dealing with the stress created by the pandemic that we all feel, we are happy Calling All Crows can facilitate that.”

Another Boston rock artist who’s doing live streams is Bill Janovitz from Buffalo Tom. For the past few weeks, Janovitz has been putting on a Virtual Happy Hour, with the next one happening on April 4 at 4:30pm. He streams performances through Buffalo Tom’s Facebook page, while encouraging fans to make requests while donating to their favorite charity.

“Inspiration comes from being cooped up and wanting to play music, then seeing others do similar livestreams,” Janovitz said about why he started doing it. “The first one worked very well and encouraged me to do the second and, this week, the third. I am happy to try to hit the requests that come in, as it makes it feel much closer to a live show than me just performing to a phone camera. These things happening in real time make us feel more connected than if I just record a few videos and post them later. I like the live-TV vibe of these and I even get a little anxious about them.”

Gray Bouchard from the Boston bands Gray Bouchard & The Dedications and Salem Wolves has been putting his own spin on live streaming by performing songs from his favorite songwriters. He began with a week of Warren Zevon songs, then started playing some Phoebe Bridgers tunes and the other day he performed a solo acoustic version of Semisonic’s “Closing Time.”

“Initially, I started with Warren Zevon when everything first hit the fan and the whole social distancing thing kicked in,” Bouchard said about his song selection. “The situation made me think of this fantastic lesser known song of his called “Splendid Isolation.” It has all these weird, signature Zevon lines from the perspective of a paranoid shut-in about being like Georgia O’Keeffe and being Michael Jackson in his own private Disneyland. Zevon’s always been a favorite of mine and I don’t typically do a lot of covers, but without local music to see I have time to kill and it seemed like a fun challenge.”

“I started playing [Phoebe Bridgers]  since she is legitimately my new favorite artist and I was running out of Zevon’s material,” Bouchard adds. “They’re oddly similar artists in that they’re emotional singer-songwriters with a knack for humor and a bit of an apocalyptic perspective, which of course feels apt right now.”

This weekend, a bunch of Boston bred bands and musicians will hit the internet. Alt-country dynamos Ward Hayden & The Outliers will be kicking off their Outliers Fridays live stream series on April 3, while David Wax Museum will be getting folky on that very same day during the afternoon at 2pm as part of their weekly live streams. Linnea’s Garden, featuring Linnea Herzog from the former Boston indie punk act Poweslut, will perform online on April 4, and Cambridge music nonprofit Club Passim is putting on live streams to benefit their organization with Pamela Means performing on April 3, Mary Gauthier on April 4, and Matt Heaton on April 5.

Just because you’re at home doesn’t mean you can’t be entertained. Log on, watch your favorite musician play a set, and chip in a few bucks. It’ll go a long way in helping art and music thrive in a time where so many doors are closed.

Check out DigBoston’s virtual events calendar here and add your events for free (you just have to create an account—it takes a second).