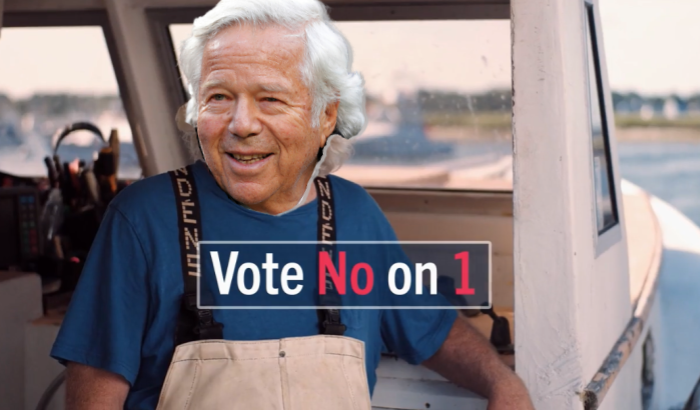 The Fair Share Amendment “will allow Mass to improve transportation and public education by making the very rich pay their fair share.” Kraft has other plans.

There’s no doubt that we’ve spent lots of time over the past two-and-a-half decades clawing at the reputations of people and institutions who your average Greater Boston person thinks are splendid, from Jim and Margery, to the cops, to the Sox. We swear, it’s in your best interest.

Last year, for example, Dig contributor Christopher Calnan reported on how Patriots owner Robert Kraft’s foundation apparently leans on his football team’s vendors for funding then basks in the spotlight when their organization showers small needy nonprofits with generous gifts. The year before, Dan Atkinson showed how the Krafts earned gobs of positive press coverage for using the Pats corporate jet to bring masks from China to Mass while making millions from their own PPE business thanks in part to relaxed FDA and state bidding requirements.

To be completely honest, very few readers gave a booger about either of those damning developments, which came as no surprise since there is no known Kraft kryptonite, even for this Trump backer in blue Mass, and since his family supports any number of charities whose leaders and fellow donors comprise the status quo around here. And as far as the status quo is concerned, Kraft can do no wrong. Which is likely why there have been relatively few reports about the weight the team owner is throwing behind the campaign against a proposed constitutional amendment to add a 4% surtax on annual household income above $1 million. Here’s more from Banker & Tradesman:

The No on Question 1 campaign’s 30-second ad features a cranberry grower, a lobsterman, an MIT professor emeritus, and Ann Sullivan, who owns Metro Equipment Corporation in Braintree, among others. Together, they encourage voters to turn down the surtax amendment because of how it could apply to some income derived from the sale of a business or home.

The surtax proposal would shift the state away from the flat income tax rate structure enshrined in the Massachusetts Constitution. If the amendment is approved by voters, the first $1 million of annual household income would still be taxed at the current 5 percent tax rate and income above that first $1 million would be taxed at an effective rate of 9 percent.

Now that we got some of the details out of the way, allow me to simplify: these billionaires are lying to you. Because, well, of course they are. And because they know that they can dupe innumerable broke and middle-class schmucks who think they’re going to be wealthy one day. As Matt Taibbi wrote in Griftopia before he joined the grifter ranks himself, “in a country where every Joe the Plumber has been hoodwinked into thinking he’s one clogged toilet away from being rich himself, we’re all invested in rigging the system for the rich.”

While history books almost always reflect on crass plutocrats like the Krafts with appropriate disdain, their short-term chess moves play well in contemporary headlines. Fortunately, Question 1 supporters are around to fact-check.

“A few billionaire CEOs who don’t want to pay their fair share in taxes are funding a campaign that misleads voters about Question 1,” Jeron Mariani, Campaign Manager for Fair Share for Massachusetts, said in a statement. “But our campaign – thousands of educators, workers, small business owners, parents, faith leaders, municipal officials, drivers and transit riders, and neighbors all across the state – is ready to counter their scare tactics one conversation at a time.”

In one specific rebuttal, Fair Share supporters take issue with the claim in the absurd commercial that “Question 1 would nearly double the income tax rate on tens of thousands of small businesses owners, family farmers, and homeowners.” Their response: “Question 1 would fix Massachusetts’ unfair tax system by creating a 4% tax on the portion of a person’s annual income above $1 million. Any income under $1 million in a single year wouldn’t be affected, and just the portion above $1 million would be taxed more: an additional four cents for every dollar of annual income above $1 million.”

“It’s day two of the billionaire-funded ad campaign opposing Question 1, and they’re already having trouble keeping track of which billionaires are bankrolling their campaign,” said Jeron Mariani, Campaign Manager for Fair Share for Massachusetts. “Voters shouldn’t be fooled by donations being routed through out-of-state corporations or through multiple companies; the opposition to Question 1 is driven by a small number of the wealthiest people in Massachusetts who would rather spend millions scaring voters than pay their fair share.”

“When I go door to door talking to voters about Question 1, I’m joined by educators, parents, and school staff who want our schools to have adequate staffing to give students one-on-one attention and help them recover from learning loss,” Liz Speakman, a Quincy parent and Regional Field Organizer with Fair Share for Massachusetts, added. “I’m joined by drivers who want to see the potholes on our main streets fixed, bus riders who are worried about the state of our public transportation infrastructure, and students who want to get a public college degree without taking on enormous debt.

“That’s who our campaign is, and I know that when working people join together and have conversations with our neighbors, we can overcome the scare tactics of a few billionaires.”

I’m not so sure considering how stupid people are, but I sure do hope so.