Couscous, roasted beets, pineapple BBQ, and a lunch counter where everybody knows your name

I first discovered Mo’Rockin Fusion in the Boston Public Market on an eerily slow weekday afternoon about a month ago, a scene made that much quieter by the temporary Orange Line shutdown, which was still underway at the time.

Most of the food hall was pretty empty, but not this particular counter. Mo’Rockin Fusion, which bills itself as Morrocan food with a twist, had a line of customers patiently waiting for what appeared to be the most interesting food in the building, served from a hot table full of ingredients fit to brighten up lunch breaks. 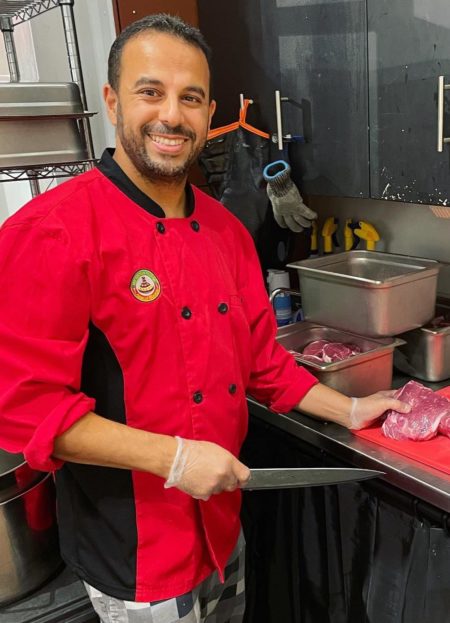 Everyone knows Mo, the proprietor and chef, and in turn he calls out many of his guests by name. On the day I visited, he was even greeting people who were not there to give him their business; one man passing through the market made an attempt at a Moroccan greeting which it seemed Mo taught him, a kind of private joke between the two.

The menu is simple but hits all the key notes, plus features some bonus tracks. You can design your own bowl from a list of ingredients, or order right from their “royal” selections—I got the Princess, their chicken and couscous served with roasted beets and finished with pineapple BBQ and white-garlic sauces. The couscous was fluffy with juicy bite-sized chunks of chicken and beets chopped almost into a salsa.

I commented, and Mo agreed, that it’s all about the sauces—his winning combo gives the dish depth, and for those who can handle some oomph, Mo will also add a third hot element as a kicker. Even with the Orange Line closed at the time and business being somewhat slow compared to usual, Mo was positive. He’s an upbeat guy, and expected things to return to normal soon. We can only hope so; vendors come and go, in the Public Market and elsewhere, but Greater Boston foodies should queue for this one as often as possible to ensure Mo’s success long beyond transit and pandemic shutdowns.