At first glance it seems a bit odd for Chrissie Hynde to put out a solo record after nearly 35 years since The Pretenders’ debut record hit the shelves. After a bit more thinking however, she’s always been the creative force and figurehead for the band over their nine album spread, so it’s really just a continuation of what she’s been doing all along. The last show in town was five years ago, and it was an enthusiastic (with some prodding) crowd that greeted her, even though it was clear that the audience wasn’t all that familiar with the material from Stockholm, which was heavily featured throughout the set.

Perhaps she sensed that starting the show with a heavy dose of the new record wouldn’t be a good strategy, but playing three lesser known Pretenders songs (“Don’t Lose Faith In Me,” “Biker,” and “977”) didn’t get the energy level up to where it should have been. Losing patience with cell phone cameras also put a hitch in the proceedings. During “Biker,” Hynde came to the edge of the stage, posed, and told the people to get their photos now. Moments later, she brought the song to a halt, telling the crowd that she was sick of seeing phones out and to put them away and enjoy the show. After a brief huddle at the drum kit, the band kicked right back in the song as if a giant pause button was released.

“Talk Of The Town” got a few fans out of their seats but it wasn’t until “Kid” came in, with Hynde’s ageless/timeless vibrato that the room collectively found their legs and got into it. Of course, this pattern would play out as newer material was mixed into the set, despite the relative high points of songs like “Down The Wrong Way,” with guitarist James Walbourne coaxing Neil Young tones from his guitar. “You don’t think we’re gonna rock, do you?” Hynde playfully admonished the room after that one.

Photos of both bands 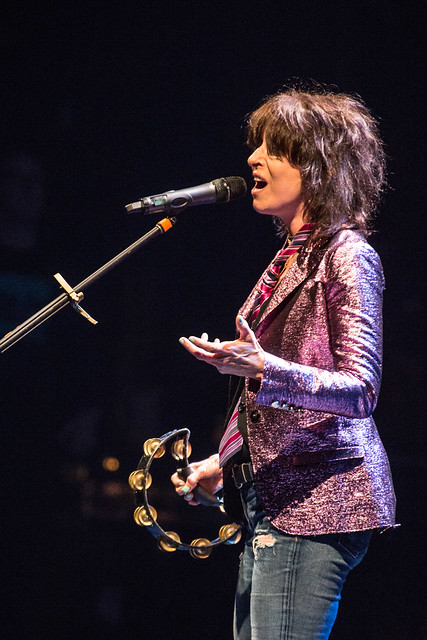