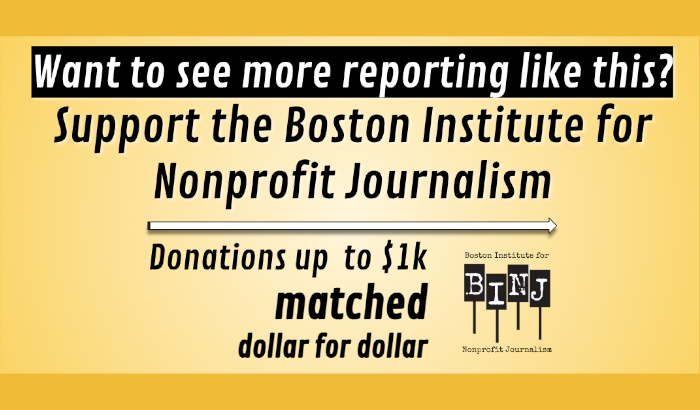 This #GivingTuesday, Help BINJ With a Donation—Matched Dollar for Dollar Up to $1,000

With Giving Tuesday—the unofficial holiday dedicated to donating to nonprofit organizations—upon us, we thought we should address a much broader audience than we normally do in our big annual fundraising appeal for the Boston Institute for Nonprofit Journalism.

So, we’d like to start by introducing our organization and what we’ve been doing over the seven-and-a-half years since we launched in June 2015. Then ask for your financial support. The first $1,000 of which is matched dollar for dollar by the Institute for Nonprofit News and the Miami Foundation through their NewsMatch program up to a total of $15,000 until the end of December. We’re already a third of the way toward that goal and with your help we’d like to raise another third of that total this week.

BINJ was founded to provide investigative journalism to independent news outlets serving communities around Massachusetts that cannot afford to produce it themselves. Because investigative reporting frequently requires weeks or months of hard work by specialist reporters and editors with the requisite skills to do deep dives into a host of intractable political, social, and cultural problems in the public interest. Such reporting makes friends, often the victims of one or another malfeasance perpetrated by influential institutions, but it also makes enemies of just the kind of rich and powerful people that have traditionally funded investigative journalism through advertising or grants.

So, it’s very difficult to fund this type of endeavor—either as a for-profit or, in the case of BINJ, as a nonprofit. Because the work of doing journalism in the service of democracy and social justice is much less attractive to big funders than the easy lifestyle journalism dominating what passes for an American news industry that challenges nothing and threatens no one, least of all the good and the great … since big funders are sometimes the targets of our reporting.

If rich and powerful people don’t fund us consistently, who does? Regular folks—like most of you reading this missive. We rely on your donations of $25 to $1,000 a year to keep on keeping on. If you’ve donated before, we’re asking you to do so again. And if you’ve never donated to us, or even heard of us before, we’re asking you to do us a solid today.

Together, dozens of working people making small cash gifts to BINJ can help us meet our goal of $5,000 in donations (of up to $1,000 each) this week—putting us just another $5,000 away from getting the full $15,000 match on offer from INN and Miami Foundation. Which means $30,000 overall we can spend on producing cutting-edge journalism on critical issues of the day across the Commonwealth and beyond in 2023.

Every dollar counts and we appreciate any assistance you can spare in the spirit of Giving Tuesday. And in the defense, ultimately, of our democracy.

Chris Faraone is editorial director and Jason Pramas is executive director of the Boston Institute for Nonprofit Journalism. They also run DigBoston.