Beautiful spaces to hike above Greater Boston this fall

ALL PHOTOS BY MARC HURWITZ

Foliage season in New England is always something special, but post-foliage season can be just as good if you’re a hiker in the local area because you suddenly get great views that open up from the hills near the city of Boston that you wouldn’t have had even a few weeks ago. And believe it or not, you can find some pretty rugged “mountains” (yes, a few are actually called mountains) and hills inside Route 128, including a couple of summits that come very close to having 360-degree views. Below are some of the best of the lot, with some being literally minutes away from downtown Boston; GPS coordinates are given in part because some of these are pretty tough to find. This surprisingly rugged and remote park just off the always-busy Route 1 has its share of hilltops including Castle Rock, Eagle Rock (see below), Breakheart Hill, and Rocky Hill, all of which have views from their open ledges, but very few know about this particular hill, which sits on the other side of the Ridge Trail from Castle Rock and is a popular spot for geocaching since it is so incredibly difficult to find. The short but rather precarious path up the hill from the Ridge Trail emerges from the woods to a flat summit with views in all directions, and the views from the Montowampate Overlook on the north edge are particularly fine, with endless woods for as far as the eye can see. While Great Blue Hill gets much of the fanfare, this rocky summit, which can be reached via the north fork of the Skyline Trail from Great Blue or via a short but extremely steep section of the Skyline from Hillside Street to the south, actually feels a bit more mountainlike even though it is lower in elevation. And unlike its neighbor to the west, Hancock Hill is completely unspoiled with no roads or buildings on top, and the views from its east and south face are not unlike those you might find 150 miles to the north in the White Mountains of New Hampshire. If you’re adventurous, following the narrow paths to the east face are well worth it for the wide open views of the Boston skyline, the ocean, and much of the South Shore. 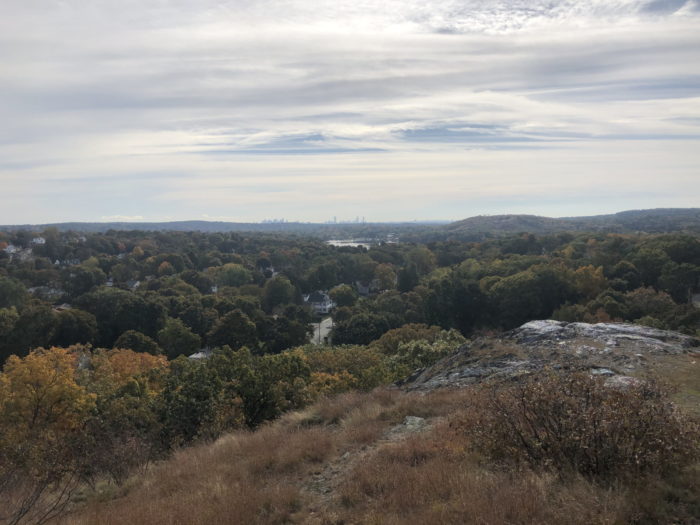 Woburn is a densely populated city but it has some very fine open areas, including the massive Horn Pond area and the much smaller—but no less spectacular—Rag Rock. Also known as Mount Mianomo, this bare summit a few blocks north of the north edge of Horn Pond has sweeping views southward of Horn Pond Mountain (which used to be home to a ski area, by the way) along with Woburn, Winchester, and in the distance, Boston and even part of the Blue Hills on the other side of the city. This is a total “bang for the buck” hike, as it is only a few minutes up the trail from Bacon Street to the summit, making it a good one if you’re pressed for time. The Middlesex Fells has countless hills within its 2,000-plus acres, including such popular spots as Pine Hill, Melrose Rock, Pinnacle Rock, and Black Rock. One of the nicer summits is this one, which sits just off the Skyline Trail between Sheepfold and Bear Hill a short distance west of Route 93. Easily accessed from the Sheepfold parking lot to the south, Winthrop Hill has the feel of a much higher peak even though it is less than 300 feet in elevation. Its flat ledges are perfect for a picnic or catching some rays, and from its overlook you can see the hills of Southern New Hampshire on a clear day. The aforementioned Crow Hill in Breakheart Reservation is pretty unique for the local area in that it has unimpeded views in nearly all directions since it is basically above treeline, and this massive summit within the Blue Hills also comes very close to having 360-degree views while also being a good 200 feet higher than Crow Hill. Buck Hill can be a wild and wooly spot that isn’t for the faint of heart on a windy day or when it’s snowing out, but for those craving an alpine experience only minutes from the Boston line, this is one you won’t want to miss. It’s easy to write off the Lynn Woods as nothing more than a city park, maybe because Lynn is a decent-sized city with lots of development within its borders. But this huge area is easy to get lost in, and you can quickly find some real peace and quiet depending on the trails you take. And even though the northern section of the Lynn Woods isn’t as sprawling as the southern part, it feels more isolated in part because its only real access is via Great Woods Road because the Pennybrook Road lot is so far away. Right in the middle of the northern section is this flat-topped cliff, which has views of Boston and is another great spot for a picnic. By the way, the back path up to Weetamoo Cliff is named “The Wicked Hard Trail” by some, and for good reason as you might not want to take it when conditions deteriorate. Don’t let the name deter you, though you should at least be aware that rattlesnakes can indeed be found throughout the Blue Hills, including in the northeast section where this exposed peak sits. But honestly, the trail down the back side of Rattlesnake is something you probably need to worry about more than rattlesnakes, as it is almost impossibly steep going down, especially when the trail is wet. Coming up the Skyline Trail from the Shea Rink parking lot is much more gradual, and the endless views from a tiny side trail just off the Skyline at the top of the hill are memorable, especially when snow starts to coat the endless woods in the distance. From the summit you can turn around and return to the rink lot or, if you’re more adventurous, you very carefully drop into the valley below and continue on the Skyline to other hills. The southern part of the Eastern Fells is not all that well-traveled, in part because the Rock Circuit Trail is a real leg-burner with endless ups and downs, but both Boojum Rock and the old site of the MIT Geodetic Observatory a few minutes west make up a fascinating part of this reservation. In some ways, Boojum Rock is the “last” of the overlooks before dropping down into the basin that is home to Boston and areas just north of the city, which makes for unimpeded views of the city skyline, and Boston indeed feels close enough to touch from this spot. By the way, if you don’t want to do the longer route from the Flynn Rink in Medford, there is a small parking area along the Fellsway East that will make for a much quicker hike. Most of the hills in Breakheart can be found on or near the beautiful Ridge Trail along the west side of the park, but this steep open summit is not only pretty far away from the Ridge Trail but is really kind of in the middle of nowhere, giving it a remote feel. The approach from the south is quite dicey and should definitely not be used to descend Eagle Rock if the rock face is wet; it is much easier coming up from Pearce Lake (Lower Pond) via a more gradual path if conditions are bad. Whichever way you go—and you can certainly go up one way and drop down the other in dry weather—the views of Pearce Lake are quite dramatic as you feel like you’re right on top of the lake, which has a beach area that’s popular during the summer but is mostly quiet once the weather cools down. One of the most difficult hills to find in the entire reservation, Kitchamakin’s out-and-back paths from the Skyline Trail are actually pretty easy to traverse as they are mostly level, but they are just so difficult to follow because of all the twists and turns. This is one hill that you’ll want to get to by using a GPS tracking app or device, and if you are actually able to find Kitchamakin, you’ll be rewarded with one of those rare views inside Route 128 where you don’t see any signs of civilization at all—just endless trees and hills. By the way, a trail descends southward from the hill to the Bouncing Brook Trail far below, but it’s steep and has lots of loose rocks, so it’s definitely not for the timid.

Plenty of other hilltops with good views can be found inside Route 128 as well, including Hawk Hill and Hemenway Hill in the Blue Hills, Pine Hill in the Middlesex Fells, the aforementioned Horn Pond Mountain in Woburn, Whipple Hill in Lexington, Prospect Hill in Waltham, and Lantern Rock and Mount Moriah in the Lynn Woods. You really can’t go wrong with any of these or the ones mentioned in more detail above, and there are even more summits out there that aren’t very far from Boston, so if you’re in an exploring mood, grab some maps and head out for some hikes that you won’t soon forget.