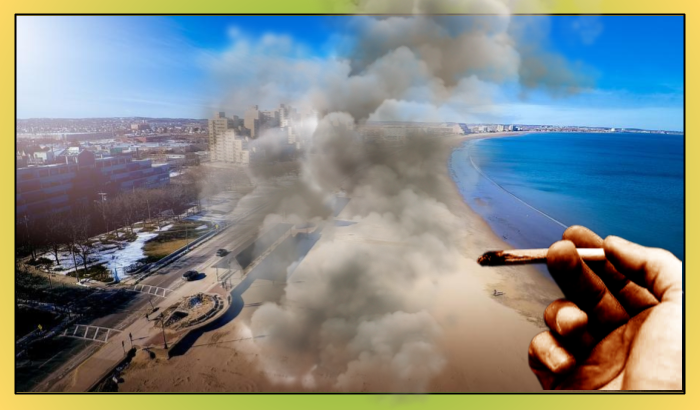 What’s your favorite spot to hit after leaving the dispensary?

Here’s the deal that got us to the point of actually writing this: the team here at the Dig keeps making requests like, Hey Strain, can we get a list or two from you every now and then? Something about Boston and cannabis and hashtags? It’s really good for stash engine optimization. Or something like that.

I thought up a few ideas, most of which sucked since they were born out of the self-imposed home confinement I’m basically still observing, and so I thought it would be best to go into the world and find some good leads.

I rolled up a dozen cones, plus packed the requisite edibles and a few pens for backup, and started by heading south on the Blue Line. After blazing on the water in Revere, I headed into Eastie, and then on into the Haymarket area and then to the Common before moving southward.

You probably see where I’m going with this. Before I ever arrived at an idea for a list, I was on my way to making one. Funny how that works.

And finally, before we get on with the specifics, the same aforementioned people from the Dig who pushed me to compile this resource also want me to tell you that none of us encourage anyone to break the law. Furthermore, we also recognize the privilege that is implied with this kind of compendium, since cops in some places are still using weed as an excuse to racially profile and worse.

None of that, however, changes the fact that heads always need spots to puff, so we’re just saying that in the event that you could or would want to burn something delicious down to the roach in the Hub, then these are some places where you may want to consider doing that.

We know that you don’t need us to tell you that it is a good idea to smoke weed on the beach. And that it’s critical to bring a torch as opposed to a mere mortal Bic lighter. We do especially like Revere Beach for sun burning though, since it’s spacious in some places, plus it’s closer to loads more solid food options than other preferred stoned tanning destinations like Wollaston Beach down in Quincy. We hope it goes without saying, but this ain’t the place to partake during busy hours with families around. The whole point of this article is to stay in the shadows, or at least far enough away from anyone who may run the risk of ruining your high.

Obviously the Charlestown Navy Yard isn’t just great for rolling and smoking giant joints in any number of places and grabbing a high or lowbrow sub of your choice from Dovetail or 7-11 (don’t automatically rule out the latter, they’re good, especially if you’re visiting Pier 420). It’s also one of New England’s premier tourist traps (in a good way) and historical attractions. All of which is of course only made that much more fun when you’re consuming something special, potentially from [Ascend] in North Station which seems to be the closest dispensary. From a 2014 Dig article titled, “Here’s Why Everyone Was Getting Stoned On Boston Common Today” from January 2014: “If you were on the Common this afternoon, you might have seen a smoky gaggle of stoned revelers up on the summit known as Mount Michael Malta. The assembly, organized by DigBoston Blunt Truth columnist Mike Cann, was dubbed a ‘Smoke Out/Vape Up,’ and came as a response to a recently enacted ban on lighting anything in public parks.” Malta, better known as the King Of Pot (or simply K.O.P.) was a dear friend of the Dig and the movement, and as such this particular place—the literal and metaphorical highest point on the Common, by the monument close to the Beacon Street side—is for those who want to honor his memory, whether they know him or not, in this shaded Xanadu overlooking the nation’s most beautiful public park and garden.

Here’s a gem of a reefer resource that I don’t mind telling you about no matter how obvious it is. Because every time I see somebody lighting up on Mass Ave I just want to scream at them to step a few feet off the beaten path. The SW Corridor is long, with no shortage of trees to park under for bake time between Forest Hills and Back Bay. But since downtown is more densely populated, let’s focus on that leg of the stretch. There are extra sweet spots on either side of the Mass Ave T stop, oases you can find just feet away from the hustle and bustle of the South End. Do this frequently and you’ll start to run into some familiar faces; it’s like a smoking club out there sometimes, no invitation needed.

This is actually way trickier than some non-JP/Mission Hill/Brookline/Roslindale residents may realize. Those who frequent the pond area know that it’s basically a zoo morning, noon, and night, and that lighting a monster spliff and trying to blend into the crowd of parents with kids not to mention all the yuppies breathing heavily in exercise mode and not wanting to inhale what you are putting in the air will get you nothing but foul looks. There’s no real down time, so the secret is to find one of the lesser explored side paths to step onto for a short puff. Once you’re toasty, be sure to find the u-bench, which I happen to consider the medallion of the Emerald Necklace. It’s definitely one of the best mindfucks in the city, not to mention proof that this is a playground for partaking after all.

What’s your favorite spot to puff in public? Let us know @DigBoston. There will be follow-ups!

DigBoston is a one-stop nexus for everything worth doing or knowing in the Boston area. It's an alt-weekly, it's a website, it's an email blast, it's a twitter account, it's that cool party that you were at last night ... hey, you're reading it, so it's gotta be good. For advertising inquiries: sal[email protected] To reach editorial (and for inquiries about internship opportunities): [email protected]