At first glance, The National might not strike one as a band who command a following that fills arenas. The group’s literate, self-effacing gloom certainly lends itself to a certain cultish devotion, but few artists making music that sounds this way have translated the approach into the clout to personally curate and headline a two-day mini-festival in a tennis stadium with a capacity of 10,000-plus.

But that’s precisely where the last weekend in September found the erstwhile-NYC-based quintet, who hosted the inaugural “There’s No Leaving New York” at Queens’ Forest Hills Stadium. Over two pitch-perfect early autumn days, a cast of eight acts bolstered two unique National sets for a weekend of music that rewarded casual fans and the band’s diehard faithful alike.

Saturday afternoon opened with a bluesy set from Adia Victoria, who accompanied The National on last year’s Boston tour stop, before ceding the stage to upstart singer-songwriter Phoebe Bridgers. While Bridgers’ raw, openhearted folk feels more suited to a darkened theater than a blindingly sunny outdoor stage, songs from her lauded debut Stranger in the Alps remained compelling in the latter context. The luridly melancholic dream pop of Cigarettes After Sex fared better as early evening mood music, with all-black-clad bandleader Greg Gonzalez channeling the ideal measure of aloofness against his airy, heartbreaking melodies. In the day’s most (relatively) outside-the-box booking, Jason Isbell and his 400 Unit brought some earnest Americana twang to the bill, to an appreciative reception.

Sunday’s daytime sets began with a ferocious half-hour from Bully, who capped off a selection of their own grunge-punk with a ripping cover of PJ Harvey’s “Snake.” U.S. Girls ­– the Meg Remy-fronted project who released one of 2018’s art-pop highlights with February’s In A Poem Unlimited – eschewed the easy route of its most accessible tunes in favor of a set that seemed to blend into one lengthy prog-disco odyssey. Cat Power, drawing one of the more reverent non-National crowds of the weekend, reached back for some 90s classics while previewing the forthcoming Wanderer, with Chan Marshall sounding positively breathtaking backed by the minimalist accompaniment of her band. In the direct support slot, synthpop oddballs Future Islands felt like Sunday’s odd men out. They had style and stage presence to spare, as always, but absent the patience for vocalist Samuel T. Herring’s fusion of acrobatics and incongruous death metal growls, their appeal remained elusive.

Across those eight sets, there was a lot to like from most every angle of the fanbase The National have built over their nearly 20 years together – artists that have inspired, been influenced by and complemented their wordy, artful and subtly evolving style. Hence, both Saturday and Sunday’s closing sets felt like proper culminations, covering the band’s full range of talents. Night one gave us singer/lyricist Matt Berninger at some of his most unhinged as he pushed his voice towards its limits and indulged a particularly lengthy trip around the stadium’s general admission floor for “Mr. November,” but also his most tender amid a pair of duets with Phoebe Bridgers on “Sorrow” and “I Need My Girl.”

Sunday’s set, meanwhile, made highlights of several cuts from last year’s Sleep Well Beast while breaking out a number of rarities and surprises. “So Far Around the Bend” – the band’s contribution to the 2009 Dark Was the Night compilation and the source of the festival’s titular lyric – received a welcome airing, and the encore opened with an earnestly-dedicated Cat Power cover following a main set stacked with Alligator and Boxer deep cuts.

All-told, the band repeated just two songs across the pair of 90-plus-minute sets, and while there are always omissions to be argued for a band with a discography two decades deep (no “Slipping Husband”? “Murder Me Rachel?” anything from The Virginia EP?), the two nights delivered most everything The National have become known and beloved for. As a victory lap for a band winding down a busy year on the road, and an east coast answer to their April Homecoming festival in Cincinnati, this weekend hit all the marks. 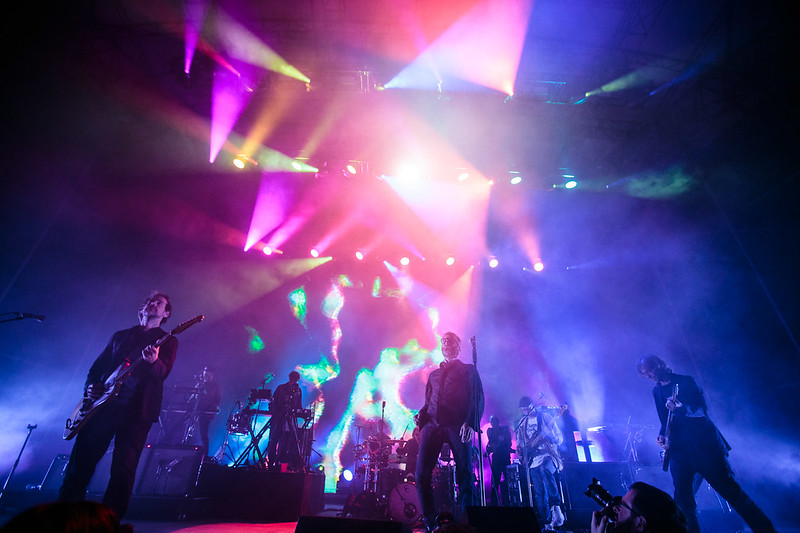