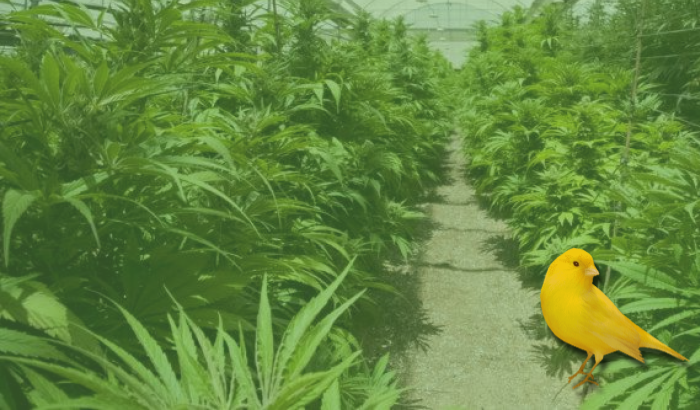 Stores are opening at a faster rate than revenue is growing, leading to an average revenue per store decrease

In 1983, United Technologies, the industrial conglomerate, began publishing full-page poems in the Wall Street Journal under the name of UT Chairman Harry Gray. One of those poems had a line that read something like, When 10,000 people believe in a dumb idea, it is still a dumb idea, and went on to encourage the reader to believe in oneself. I have followed that advice for nearly 40 years. Sometimes it’s a lonely place being the one in 10,001 voices, but every now and then something happens to breathe wind beneath one’s wings.

Green Market Report recently reported on a short-seller report issued by Blue Orca Capital with respect to Innovative Industrial Properties, Inc., a cannabis-focused real estate investment trust (NYSE IIPR). Blue Orca cited IIPR client Parallel as the canary in the coal mine, “demonstrative of broader risk … across much of IIPR’s portfolio; long-term leases made to low credit quality tenants with significant downside in the event of default.”

Parallel’s real name is Surterra Holdings, Inc. and was founded by chewing gum family icon William ‘Beau’ Wrigley Jr. Parallel has gained fame for some of its bold acquisitions, including New England Treatment Access (NETA) whose flagship Brookline store, just a few hundred feet from the City of Boston line, was, for some time, the only adult-use retail store accessible by the region’s train and trolley system. NETA’s flagship store made more headlines than Brad Pitt, with long lines, visible police details at a major intersection, some of the highest sales numbers in the country at one point, and a purchase price by Parallel rumored to be $800 million (the purchase included NETA’s other store, in Northampton, and their cultivation and manufacturing plant).

Through all the excitement, no one seemed to focus on the fact that the City of Boston would eventually have 50-plus adult-use retail stores and once they opened, NETA’s market exclusivity would diminish. Since mid-2019, it was clear that the Field of Dreams mentality gripping many retail cannabis entrepreneurs was misplaced. You could build it, but there was no James Earl Jones assuring they will come. Massachusetts cannabis sales revenues have been on an upward trajectory for several years, as has the associated tax revenue, and that is where the media focuses. But scant attention is paid to tracking annual sales and dividing by annual store days to see that average revenue per store has been on a consistent downward slope. Stores are opening at a faster rate than revenue is growing, leading to an average revenue per store decrease.

Massachusetts passed the 200-store mark in early 2022, while stores have finally started to open across Greater Boston and in surrounding communities served by the MBTA. Last rumor circulating through the Massachusetts cannabis community was that NETA’s flagship store was down to $40 million in annual revenue, and speculation was that NETA’s continuing revenue decline (which is natural and predictable) was a factor in derailing Parallel’s special purpose acquisition company, or SPAC plans.

Blue Orca got it slightly twisted; Parallel might be IIPR’s canary, but IIPR is the industry’s canary.

Back in 2019 and 2020, while investors and real estate professionals were foaming at the mouth to get into cannabis cultivation, I wondered why people would invest so much money to create a long-term fixed asset (a cultivation facility) to grow an outdoor plant indoors, a plant that cannabis antagonist Harry J. Anslinger, former Commissioner of the Federal Bureau of Narcotics, once conceded grows “like dandelions in a roadside ditch.” In 2021, it was estimated that 10% of Massachusetts’ commercial electricity consumption was being consumed by cannabis cultivators. So much for going green.

As I observed in a February 2020 article, indoor cultivation is expensive. A typical warehouse can cost $60 per foot to build. Older mill buildings or wood frame factories can be found for as little as $25 per foot. That means a 30,000-square-foot property can be bought for $750,000. To upgrade these buildings to a grow site can cost up to $250 per square foot—far more than the property was originally worth. But real estate professional after real estate professional looked at me quizzically, like, how could I not understand the opportunity?

With debt very tight, many larger multi-state operators (known in cannabis as MSOs) turned to the sale-leaseback market to raise capital. The leader in the cannabis sale-leaseback market is IIPR. You can search around and find a few other cannabis real estate funds, but no name is as prominent in the sector as IIPR. IIPR will buy an operator’s property, lease it back under a long-term lease, and often agree to provide a budget for renovations and improvements.

When completed, many of these properties rival first class office space in terms of cost per square foot—all for a plant that’s happy to grow outdoors like a dandelion in a roadside ditch.

David is a business consultant and aspiring Massachusetts marijuana entrepreneur. He is the treasurer of the Mass Cannabis Reform Coalition and CEO of NewCann Group / www.CannaVentureLabs.com. David is a past trainer for the Mass Cannabis Control Commission Social Equity training program and mentors numerous Social Equity Program participants. He speaks at various industry events and his industry insights and analysis have been featured in several media outlets. Despite a phobia for needles, in his spare time he is a regular platelet donor for the American Red Cross. Contact David at [email protected] or connect on LinkedIn at linkedin.com/in/davidrabinovitz/