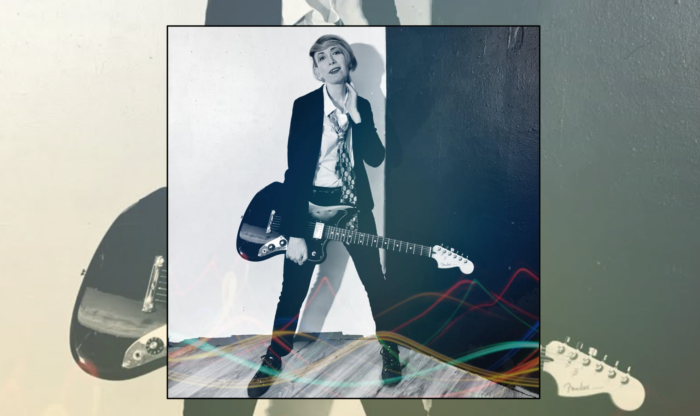 On making pandemic records and embracing the DIY approach.

With all of us spending the majority of our time indoors due to COVID-19, it’s par for the course that musicians are making new music in studios all over the world. It’s the best option to keep creatively fresh without live shows and it makes the next couple of years exciting when it comes to new releases.

Somerville resident Linnea Herzog from the Boston power pop punk act Linnea’s Garden made the Nowhere Friday Nights EP in this fashion and it’s a complete ripper. The record that came out on March 5 is the band’s first full release via local label Red on Red Records and promises to be the start of a long-lasting relationship between the two entities. It was also made in a unique way, given the fact that the original lineup of the band couldn’t be involved because of the pandemic while Herzog served as the main force behind the recording process.

Herzog and I recently had a talk about the vision behind the EP, bringing a glam style into the mix, relating science to music, and a music video that’ll be coming out very soon.

The Nowhere Friday Nights EP sounds like Blondie and the Cars fused together; there’s a catchy kind of energy but there’s also a lot of grit and angst. Were you trying to capture a raw and retro vibe with the record, or did you have a different vision in mind?

I think the vision was to draw in each aspect of every era that I like, definitely Blondie and the Cars like you mentioned. They really influenced the glam punk spirit behind this release. We also tapped into that DIY punk rock vibe for this one as well. I’m very influenced by ’90s guitar rock too, so it was really about drawing together what I love about every single era of rock music and adding my introspective lyrics.

Yeah, I really like it a lot. The EP’s liner notes say that it was all recorded with your “quarantine pod,” so what exactly is this contraption? Did you have to do a lot of improvising while making the record due to COVID-19? Is the pod a plastic bubble?

The pod just refers to a group of people where we’re together, I don’t really know how to describe it. Basically, we can be together without having to put masks on.

That was the situation while recording the EP with Hands O’d and Tom O’Donnell from Corner Soul. This wasn’t done with the original lineup of the band, so the process started from late-night jam sessions at Corner Soul’s studio in Lowell, and it turned into us recording an EP.

What in your opinion makes Linnea’s Garden different from the music you made with Powerslut? Does this project satisfy a certain artistic need that the other band didn’t?

I think so, yeah. It unfiltered me, but I’m also tapping more into lead guitar and a different kind of energy with a trio of bass, drums, and guitar versus a quartet with two guitars. I found in the past that I’ve been playing a lot of rhythm guitar parts, and for this project I play a lot more lead guitar. The bass parts are also very independent from the guitar parts, which is very different from Powerslut and other music I’ve made in the past. There’s still similar themes of sexuality, DIY punk rock, and art appreciation that are definitely coming through, but the instrumentation is a little bit different. I also hope that eventually the live show can incorporate the sort of glam rock elements.

The rawness of the glam style is definitely evident along with some flair, pizazz, and charisma that you have going on in the music. You work in science as a postdoctoral associate at the Broad Institute of MIT and Harvard. From working in that field, do you find any similarities between science and music when it comes to writing a song versus conducting an experiment or anything along those lines?

Definitely. I’ve found that there’s a lot of each one that sort of leaks in. Through my songwriting, I’ve realized that science can actually be very creative because you have to be able to see something that no one else has before to make a scientific discovery and I think that it’s the same way with music. You have to create something that nobody else has, and it can be a really difficult challenge because there are only 12 notes on the scale and there are only so many chord progressions that are pleasing to the human ear. In order to make it original you have to have a creative vision and be willing to follow it intensely all the way through; it’s the same way with science.

That’s a fantastic analogy. Linnea’s Garden recently posted on their Facebook page that a music video is on the way, so which track is it for and when can we expect it to come out?

It’s for the song “Replacement,” which is off of the EP, and it’ll be premiering during the Red on Red Records Virtual Showcase on April 16th.

Is there anything that we can expect from it? From the photo you have in the post it looks like you’ll have a black-and-white vertigo type of thing, so can we expect that to have a primary presence in the video?

Exactly, it’s a green-screen video and it uses this black-and-white spiral motif. Everyone in Linnea’s Garden, which is Amy Galaviz, Hands, and myself, will be in the video, and it’s exciting because it’s the first one we’ve done together, so it’ll be cool.