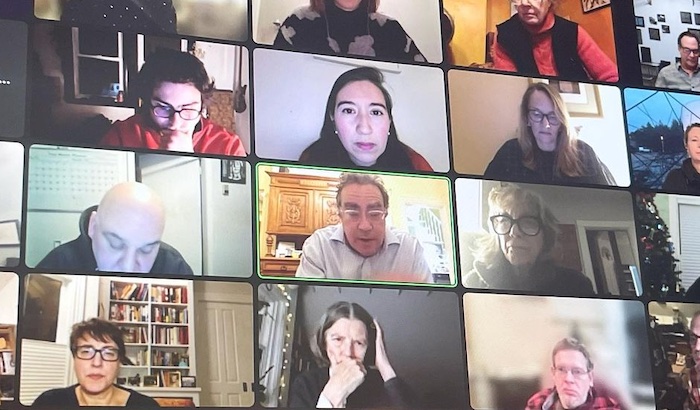 While artist studio buildings are central to having a robust creative economy, many artists in Somerville are experiencing challenges, when it comes to affordability of and access to space. To address this problem, the Somerville Arts Council has collaborated with the Metropolitan Area Planning Council to develop a Somerville Arts Space Risk Assessment. To discuss the threats that artists are currently facing, SAC held a discussion with breakout sessions on Jan. 19, offering a preview of the drafted document. In particular, development pressures and the impact of the coronavirus have presented the plight that artists are experiencing now. During the well-attended meeting, members of the artist community spoke to the struggle they are feeling.

“Things are at a crisis point for Somerville,” said Susan Berstler, director of the Nave Gallery, in an interview with the Somerville Wire. “People can’t afford to live here. They can’t afford to work here. Artists are not known for being on the top of the list for people with cash. We’re under threat.” She added, “Mayor [Joe] Curtatone was there for almost 20 years, and despite his frequent and vocal support for the arts, he didn’t really do anything to help the infrastructure … So, I’m very hopeful and curious to see how Mayor [Katjana] Ballantyne moves forward with this.”

The draft of the assessment outlines some of the contributors to the situation Somerville artists have found themselves in. The extension of the MBTA Green Line, as well as growth in the “regional demand for laboratory and office space” are “increasing redevelopment throughout the city. In addition, COVID has escalated the pressures that artists are experiencing, as the State of Emergency led to the closure of many operations and venues and eliminated revenue. In Somerville, there is a piece of legislation, the Somerville Zoning Ordinance, that requires “5-10% of commercial floor area [to] be set aside for Arts and Creative (ACE) uses in new developments in mixed-use and commercial districts.” However, the assessment reports that “a mismatch exists between the quantity and quality of spaces facing the highest exposure to development pressure and the ability for SAC to respond to the potential loss of those spaces by exercising the ACE-use set aside requirements.” Executive Director of SAC Greg Jenkins said that it would be helpful to better define ACE subcategories.

“We’ve got existing buildings that are in districts that, because of the zoning and interpretation of ACE, have the ability to not put pure arts play in them,” said Jenkins. “It does revolve around this issue of the ACE definition. It will help identify what the true factors are in that tension. Until you’re able to name it, how can you discuss it or problem solve about it? The ACE definition needs to be clarified, both in the set aside issues and in the fabrication district … Here you have these set asides … but how do we ensure that artists go into those spaces?”

The assessment also recommends the establishment of a municipal fund to receive in-lieu payments and the creation of a database that would track artists’ needs. In addition, it suggests that there be a collaboration between SAC and the Office of Racial and Social Justice, in order to advance equity for BIPOC artists. Annis Sengupta, director of arts and culture at MAPC, said that going forward, the team has two main priorities in mind.

“There are two tracks of things that would need to happen,” said Sengupta. “One of them is just attacking the low-hanging fruit, which is making the text changes to the zoning, which would change the way that the ACE category is subdivided, so that you separate the arts and innovation uses and then exclude the innovation uses from being eligible … And then the biggest piece of work that will need more community engagement is that relationship building with the arts community and figuring out how you create a meaningful database and municipal fund with accountability to the arts community.”

Bethany Noël, an artist who currently works out of a space in Vernon Street Studios, said that these concepts are encouraging but that she would like to make sure there is concrete action being taken, not just data being collected and research being done.

“The ideas are really great. It’s really great to do all that stuff,” said Noël. “I really want to see that there’s actually bureaucratic support behind that kind of work.”

Noël formerly worked out of Central Street Studios, an example of a space in Somerville that has regrettably been lost. While the old building had been dedicated to artists’ usages for some time, the owner eventually was not able to afford the maintenance of it, and it was “acquired to be redeveloped as a residential building. While the previous owner would have preferred to sell it to an arts organization or developer willing to retain its arts use, the City has no mechanism by which to incentivize the maintenance of the previous arts use or directly connect property owners looking to sell their buildings with potential developers looking to retain arts uses.” Another loss to the Somerville community was Artisan’s Asylum, a makerspace that recently relocated to Allston.

Lee Kilpatrick, director of the Washington Street Art Center, said that he has seen many artists get priced out of Somerville. While mostly Somerville artists had formerly occupied the studio spaces there, now, many of the same artists work there but have moved out of the city. Since the start of the pandemic, Washington Street has had fewer in person events or openings but has held more virtual exhibits. They will be getting a new lease soon, as the center’s building was sold recently, and Kilpatrick said he does not know whether he should expect higher rent, a situation that has left the artists grappling with the unknown.

Stephanie Scherpf, executive director of the Center for Arts at the Armory, called SAC’s study of problems “commendable,” but stated that “swifter action is needed to stabilize the situation.”

“The City also needs to look self-critically at how our sector got into this situation both through the adoption of certain policies and the absence of other policies. My greatest concern is that the City is not allocating enough immediate resources—both financial and personnel—to effectively deal with this situation. And, so far, I have yet to see any proposals related to how development money could be used to address huge concerns with current assets and projects undertaken by the City like the Somerville Media Center building, ArtFarm, and the Armory,” wrote Scherpf in a statement. She added, “I am trying to get us involved in this key conversation.”

Artist Julia Csekö described the arts and culture situation in Somerville as a “pretty fragile ecosystem,” adding, “We don’t have a lot of money, and if we fall into harder times, there’s no safety net.” She said that she appreciates the efforts of SAC but stated that the plan was “completely hinged on new development” and could use more clarity in terms of how spaces would be built, work, and function.

“My takeaway from that meeting is that we, artists, need to organize and have a plan and present a plan. We need to tell anyone that’s willing to listen what we want, because if we just take what people are giving us, it is not going to fit our needs,” said Csekö. She added, “An arts council doesn’t work without the artist community. … I do think that we need to organize on many fronts. Organizing through SAC is definitely a way to go, and I think that they do fantastic work. I think we need to organize independently, [as well].”

Noël said that the city will need to be persistent in its efforts, if it wants to value the artists who live and work there and hold them in its space.

“The real question is, do you want to keep the arts in Somerville?” said Noël. “Because the arts move. That’s our story. We will always move where it’s cheaper, because we can’t live.”