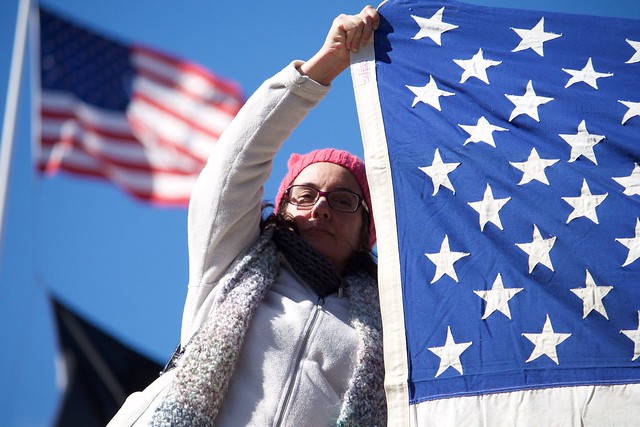 All photos by Miriam Wasser. Click image above for slide show.

Against the backdrop of the State House dome and a giant American flag, at least 200 people gathered by the 54th Regiment Memorial in Boston Common Sunday afternoon to demand an independent and thorough investigation into any collusion between President Donald Trump and Russia.

The event was billed “An Emergency Rally to Stand for Democracy,” and many in attendance wore their pink knitted pussy hats from last month’s Women’s March and carried signs or banners.

They also chanted: DEMOCRACY IS UNDER ATTACK … WHAT DO WE DO? STAND UP, FIGHT BACK! “If there is even the smallest possibility that Trump conspired with Russians, then an investigation must occur because there has never been a greater threat to democratic principles,” Olivia Hartranft, one of the event organizers, told the crowd.

Hartranft, like every speaker of the day, also invoked the now-famous words of former US Senator Howard Henry Baker Jr., one of the leaders on the Senate committee investigating President Richard Nixon during the Watergate scandal. “What did the president know and when did he know it?”

“We don’t know exactly how, but we know [Trump] is compromised by foreign nations,” said Bob Massie of the Sustainable Solutions Lab at UMASS Boston. In a short speech that sought to place the day’s gathering in a historical context of resistance and activism, Massie, who is considering a 2018 run for governor, also talked about the Revolutionary War and the Founding Fathers, noting, “They built a Constitution and Bill of Rights that was built on a set of principles that are now in danger. Can our nation continue to endure?”

“Today we face an emergency for our Democracy,” said Jesse Littlewood of Common Cause. “The stakes are too high to not have a fair and unbiased investigation. We must resist nationally and organize locally.”

“We have to demand the impossible,” added speaker Anthony Paul Farley, a professor at Albany Law School. “We’ve got fascism with nuclear weapons.” Later in the day, Jacquelyn Ryan, the first openly transgender elected official in Mass (she serves on the Tantasqua School Committee), riled the crowd with her denouncements of Trump: “We’ve got a puppet for a president.” As for his cabinet: “He nominated an outright racist and an education secretary who is woefully unqualified,” Ryan said, referring to Attorney General Jeff Sessions and Secretary of Education Betsy DeVos, respectively.

As an elected representative, Ryan promised those in attendance that she hears their concerns and will fight for truth and justice.

“Where’s Charlie Baker?” someone in the crowd yelled, prompting others to join in a chorus, WHERE’S CHARLIE BAKER? “We know where he is,” Ryan said. “He’s in Washington, DC working with his Republican cronies [at the National Governors Association meeting with Trump].”

Another highlight came from 16-year-old Medha Palnati of Westford, who took to the microphone to address the election from her point of view.

“Democracy in my lifetime was never challenged, and for the better part of my childhood, I believed this would always be so,” Palnati said.

But then Trump won.

“Since then, I have found myself fearful for the very principles upon which this nation was founded.”

In a phone interview before the rally, Palnati told DigBoston, “This is honestly the first election that I’ve been aware of; I was 12 when Obama was re-elected. I remember that, but I don’t remember understanding Obama’s policies or what Mitt Romney’s policies were. I don’t think I was aware of the political aspect of it—I don’t think I was even completely aware of what Congress was and what the Senate did.”

In addition to yelling into the void for an investigation, as speeches wrapped up, local organizers passed out postcards addressed to the governor, and distributed the phone numbers of elected officials for people to call.

“Stay angry and keep fighting,” one woman told the crowd, “because it’s working.”