French duo Jean-Benoît Dunckel and Nicolas Godin have been strangers to our land for nearly a decade, and once again their brought their A game on stage. In the studio they’ve always done the heavy lifting of instruments aside from drumming, and on this tour they’ve enlisted keyboard player Louis Delorme and drummer Vincent Taurelle to add to the mix. Live percussion always trumps a drum machine; just look at how Albini upped his game when he ditched Roland for Rey Washam and Mac McNeilly. Delorme was somewhat subtle in the mix and it wasn’t always easy to hear his contributions, but that could not be said of Taurelle, who brought ferocious kinetics to encore closer “La Femme D’argent” which is absent from the debut record recording. Singing about cherry blossom girls and sexy boys, the Rainbow Brothers exuded a detached cool that the French have crafted into a world-class art form. Clad in all white save Godin’s shoes, the band presented a united front that blended each component into a tasty soufflé. Imagine Kraftwerk with all of the Teutonic elements stripped away, instead infused with red wine and soft cheese. Bon appétit indeed!

Click on the photo for more shots of the show: 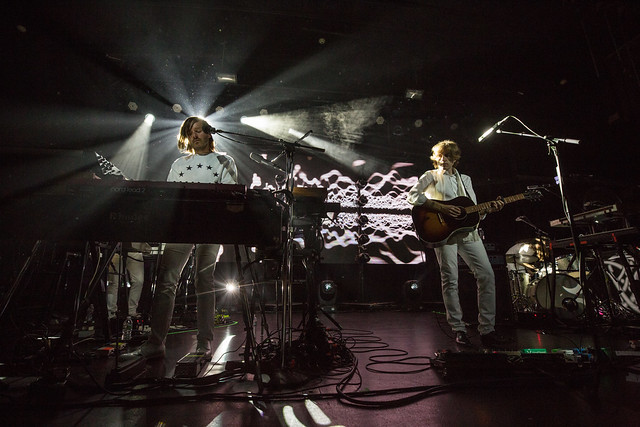